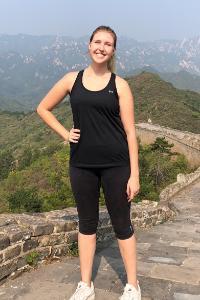 Q1: Please tell us a little bit about yourself.

A1: My name is Jillian Dowdy. I graduated from Wheaton in May 2019 with a BA in Spanish and Chinese, and I’m currently working as an ESL instructor at the Pui Tak Center in Chinatown, Chicago.

Q2: What brought you to studying Chinese?

A2: Since I was a little kid, I’ve always been interested in languages and linguistics. After studying Spanish in high school, I knew I wanted to add another language to my repertoire during college. My friend from China convinced me to give Chinese a go, so I signed up for the 101 course as a freshman. I haven’t looked back since!

Q3: What is your career plan, and how may your proficiency in Chinese play a role in it?

A3: Eventually, I plan to pursue post-graduate degrees in Chinese and linguistics, but for now, I’m using my Chinese to better communicate with my ESL students and coworkers. Even though my current plan is to remain in academia, after having studied Chinese, I feel as if a lot of career options are open to me. After all, I can now communicate with almost a billion more people in their native language!

Q4: What do/did you enjoy the most in the Chinese program at Wheaton?

A4: The Chinese department offers some of the best classroom environments I’ve been in at Wheaton. Everyone in my classes was energetic and motivated to learn, and because of the program size, the classroom felt less like I was surrounded by peers and more like I was surrounded by family. The professors contributed to the tight-knit atmosphere as well, acting as mentors as much as instructors.

Q5: Could you give some advice to future Chinese majors?

A5: DON’T GIVE UP! There will be MANY points in your Chinese major career in which you’ll feel like Chinese is too hard and you’ll never be able to learn it. Learning Chinese is like climbing a mountain: it’s slow, and difficult, and you often feel like you’re not progressing, but when you look back, you realize you’ve made a ton of progress. Study hard and seek out opportunities to speak Chinese outside of class (there are lots!). You’ll be there before you know it!