Living Faithfully in the Public Square: A Conversation with Senator Ben Sasse and Governor Bill Haslam 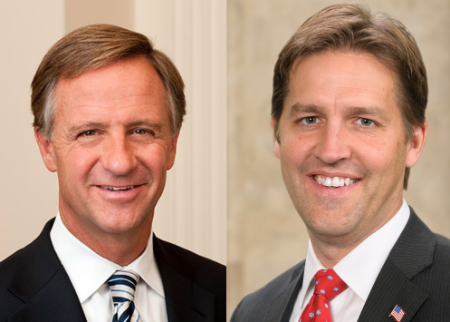 On January 18, 2022, the Politics & International Relations Department at Wheaton College hosted an event with Nebraska Senator Ben Sasse and former Tennessee Governor Bill Haslam where they reflected on the privilege and challenge of Living Faithfully in the Public Square, including the role of Christian higher education in cultivating a faithful presence in the public square. The discussion was be moderated by Dr. Amy Black and Dr. Vince Bacote. You can view a recording of the event at this link.

Senator Sasse received his doctorate in American history from Yale University. Invested in higher education, Senator Sasse has both taught at the University of Texas and served as the 15th President of Midland University before being elected to the U.S. Senate in 2014. A member of the intelligence, judiciary, finance, and budget committees, Senator Sasse is focused on the future of work, the future of war, and the First Amendment. He is the author of several books including his latest, Them: Why We Hate Each Other – and How to Heal.

Bill Haslam served as the Governor of Tennessee from 2011-2019, previously serving two terms as the 67th Mayor of Knoxville. Haslam focused on job creation and long-term economic growth as his top priorities in office, followed by education reform and workforce development. Before serving as an elected official, Bill Haslam had an extensive career at Pilot Corporation, his family-owned gas station business, expanding the workforce from 800 employees to over 14,000. More recently, Haslam became a visiting professor of political science at Vanderbilt University.