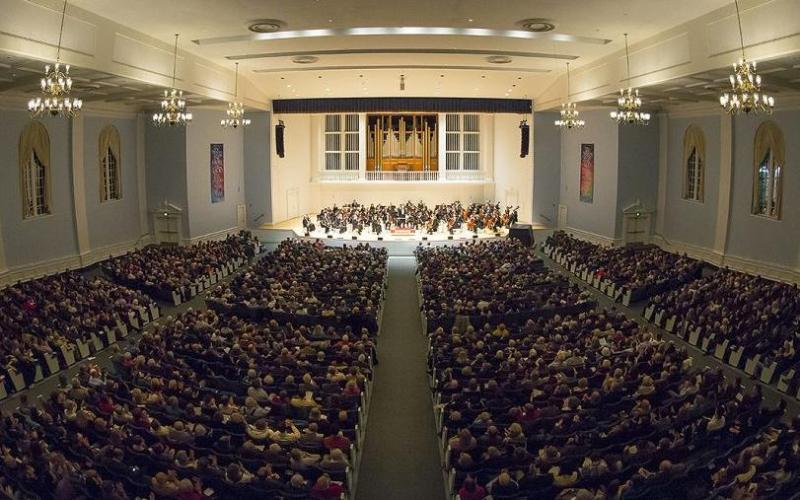 The Chicago Symphony Orchestra returns to Wheaton College’s beautiful Edman Memorial Chapel on November 18, 2022, for the first of three performances. We are happy to host the Orchestra and bring the best of Chicago to Wheaton.

CSO at Wheaton: Honeck, Capuçon & Shostakovich 5
A journey from brooding despair to rousing triumph, Shostakovich’s Fifth Symphony rescued him from the grips of official Soviet disfavor. But to many listeners, it’s a more subversive critique of life under Stalin. This program, led by Manfred Honeck, also showcases the U.S. premiere of Lera Auerbach’s Diary of a Madman, composed for Gautier Capuçon.

CSO at Wheaton: Boccherini, Vivaldi & Mozart 40
In his 2019 CSO debut, Spanish guitarist Pablo Sáinz-Villegas thrilled with “the profundities of his art,” along with “the sheen of his tone and the nobility of his rhythms,” wrote the Chicago Tribune. Sáinz-Villegas joins the ensemble in two pieces with a bright Mediterranean character. Making a welcome return to the CSO, Bernard Labadie conducts the program, featuring dark-hued symphonies by Mozart and Boccherini.

Wheaton and the CSO Partnership

Since its first performance at Wheaton College in 1960, the CSO has performed in Edman Memorial Chapel nearly 20 times. Consistently rated as one of the world’s most respected orchestras, the CSO is expanding its engagement with west-suburban audiences hoping to reach new generations with the glory of symphonic music. Read a feature article at CSO Sounds & Stories about this new partnership. >>

Tickets can be purchased at the CSO website, by calling 312.294.3000, or at the Symphony Center Box Office at 220 S. Michigan Avenue, Chicago. Tickets for these performances are not available from the Wheaton College Ticket Office.