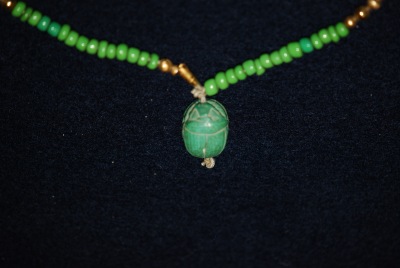 This scarab, which bears the name of Thutmose III, is one of many scarabs recovered from the ancient Near East that bear this pharaoh’s name. Scarabs are distinctly Egyptian objects that were carved from various types of stones or other materials into the shape of small dung beetles. Scarabs were so common in ancient Egypt that there are many thousands of scarabs preserved today in various museums, private collections, and the antiquities market.1 While the tops of these artifacts simply resemble a beetle, their undersides were often decorated with geometric or figurative designs or inscribed with a name. Originally used in a religious context, the scarab-beetle was associated with the sun god Re and the god Atum, who was believed to have been involved in creation.2 Dung beetles were associated with the sun because of the perfect disc-shaped food balls they formed with their legs out of cattle dung. Over time, the myth developed that the sun was propelled across the sky by the forelegs of a large beetle and that these beetles appeared spontaneously from the sun.3 Scarabs, then, began being used as amulets by those who sought protection from evil.4 Although functions for scarabs expanded over the course of Egyptian history, they never lost their original use as a protective amulet.

Beginning in the Middle Kingdom, names of persons often appeared on scarabs and were then used as seals, some of which were put on rings. The stamps of these seals have helped historians track the activities of the Egyptians in Palestine between the Middle Kingdom and the Second Intermediate Period.5 In addition to their use as seals, the names of kings or figures of the pharaoh were also inscribed on scarabs, in hopes of bringing protection to the person possessing the scarab.6 Thus, the function of the scarab was expanded during this period, but its original use was also maintained through the invoking of the name of the king.

During the New Kingdom, inscriptions on scarabs further broadened to include good luck sayings and other mottoes. The use of scarabs was also expanded to include various royal announcements (such as for an event or a coronation ceremony), and scarabs inscribed with the names of kings were collected at temples dedicated to deceased rulers.7 While many scarabs are inscribed with names, they only comprise a small number of scarabs as a whole (the vast majority of scarabs only depict geometric or figurative designs rather than names). In addition, from this smaller group of scarabs that are inscribed, the majority of scarabs bear the name of Thutmose III, like the one in the collection at Wheaton.8

Dating from the period of the New Kingdom, the scarab in Wheaton’s collection that bears the name of Thutmose III could have been used as an amulet or souvenir from a religious site. Thutmose III was the sixth pharaoh during Egypt’s Eighteenth Dynasty. He reigned in Egypt jointly with his aunt, Hatshepsut, for twenty-two years before becoming sole ruler of Egypt. He reigned alone for thirty-two years before sharing rule with his son, Amenhotep II, for a little more than two years before Thutmose’s death. During the period of his sole reign, Thutmose III conducted military campaigns that successfully conquered all of Palestine as well as parts of Syria. The pharaoh went to great lengths to be sure his name would be remembered, such as building monuments in the Nile Valley. In the last years of his reign, he sought to eliminate the name of Hatshepsut from monuments and other structures that bore her name, replacing her name for his own or that of his son, Amenhotep II (who also assisted in this practice during the final years of his father’s life).9

It seems that the majority of inscribed scarabs bear the name of Thutmose III because of his long reign and extensive military campaigns. The green stone out of which this scarab was carved is typical of many scarabs. Green scarabs were often carved out of jasper, feldspar, serpentine, and basalt.10 Although it is unknown exactly for what purpose this scarab was created, it was probably used as a good luck charm. Such scarabs were often worn by the person who possessed it (as can be visualized with the modern bead necklace attached to this scarab in Wheaton’s collection).