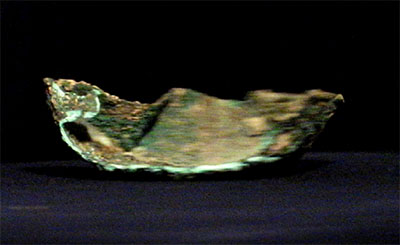 Lamps were an everyday feature in ancient Palestine. The earliest forms were made from wheel-made saucers that were pinched to create a funnel for the wick. The wicks were of twisted flax fibers, and lamps were filled with several types of oil, which served as fuel, the most common being olive oil. Other than daily lighting purposes, lamps were also used for cultic rituals. This lamp for example, is made of bronze and was found in Tomb 1 at Tel Dothan suggesting its was not used for everyday purposes.