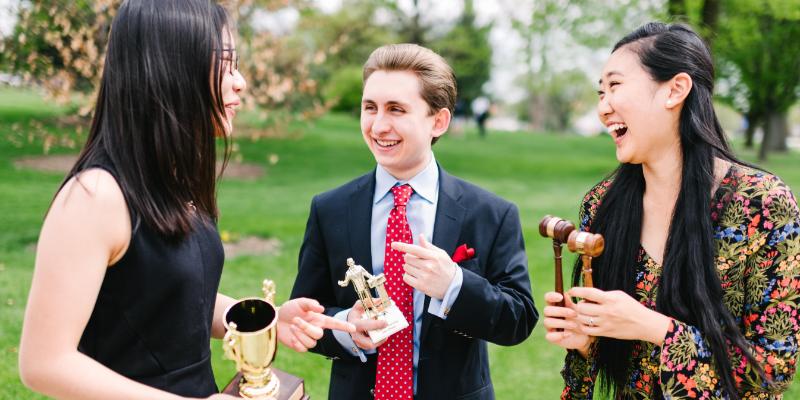 “Wheaton Debate has been responsive and supportive from my first communication with Dr. Sietman, our faculty coach…The team has become increasingly like a surrogate family as I transitioned from high school to living and learning at Wheaton College.”   - Jordan Embree

Thank you for your interest in Wheaton College’s top-ranked debate program! The following information answers just a few of the commonly-asked questions about debate at Wheaton.

A focus on extemporaneous debate:

A focus on informed debate:

*At Wheaton, we compete in British parliamentary debate (USUDA, WUDC).

Travel Squad
Participants focus on being locally and regionally competitive in American parliamentary debate while also traveling outside our region to compete in the BP (British parliamentary) format, including USU nationals and the WUDC (World Universities Debating Championship). Goals for travel debaters include honing strong argumentation and rhetorical skills and adapting their persuasive appeals to a very broad audience.

Being a part of Wheaton Debate requires a significant time commitment:

While participating in debate takes a serious commitment, it is not all-consuming. Most team members are involved in other campus activities or ministries; many have part-time jobs or internships; and many students on the team are double majors.

Wheaton Debate has a budget that is used to cover travel and tournament expenses. Cost should not be a barrier for anyone to join.

How Partners are Chosen

Undergraduates debate two-on-two against students from other schools. Team pairings are created by mutual agreement between student members and the coaching staff. The mutual request of two students to debate with one another is given substantial consideration. We consider three criteria when forming debate partnerships: complementary strengths and weaknesses, similar experience and commitment levels, and personal compatibility between pairs of students.

Students on the debate team enroll in COMM 393 (Intercollegiate Debate). It goes on their academic transcript, but the college does not charge students for the credit. Students can receive up to 1 credit per academic year (thus maximum of 4 credits total if they compete each year). Two years of Comm 393 meets the college requirement for oral competency.

Debate is an activity where students learn to think critically, to be excellent communicators, to develop skills in team-work and leadership, and to argue effectively. Debate is one of the most sought-after experiences on a resume, and the activity is valued even more when you compete for a nationally-recognized team. Wheaton has a long history of success in debate—you will find some very well-known debate alums in our trophy case in the Communication Department on the 2nd floor of the BGC.

As a team, we represent Christ within the debate community. Those who do not know Him are watching us—observing how we interact with one another and with those around us, considering what ethical standards we uphold in a debate round, noticing how we react when we win or lose. Ultimately, others watch us to see how consistently we live out our faith. We have an incredible opportunity and a tremendous responsibility to share God’s love and to communicate the hope that we have within us as we interact with students and coaches from other institutions.