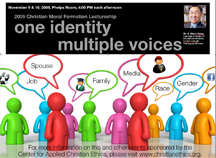 Is one’s identity a unitary concept that one forges during her adolescent years and, having successfully done so, can move on to bigger and better things in life with her identity intact? Or is that a mere hopeful illusion in this ever-protean world that is intertwined among seemingly an infinite variety of “post” conditions? Should a belief in the reality of the Triune God matter when it comes to our attempts at identity formation?

I want to invite those restless Christians to consider envisioning together the Christian self in light of the God whose eternal being is in his becoming among us.