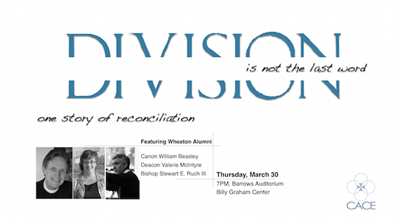 Three Wheaton Alumni share a story of reconciliation within the body of Christ.

William Beasley is passionate about bringing people together for evangelism, mission, worship, and multiplying congregations—bringing souls into the loving and transforming presence of Jesus Christ. William graduated from Wheaton in 1976 and later from Berkeley Divinity School at Yale. Since his ordination in 1984, William has been active as a pastor in the Midwest where he has planted numerous English-speaking and Spanish-speaking Anglican congregations.
From 1987 to 1998, he served as rector of Church of the Resurrection.  In 1998 the Beasleys moved to the North Shore to plant Church of the Redeemer.  Currently, Canon William serves as the Greenhouse Upper Midwest Regional Church leader and Dean of the Greenhouse Deanery in the Anglican Diocese of the Upper Midwest, (ACNA).

Stewart first came to Church of the Resurrection as a Wheaton College junior on Palm Sunday, 1988. Katherine and he learned from and served under Fr. William and Anne Beasley for a decade at Resurrection. During this time Stewart completed his Master's in Theology at Wheaton College Graduate School (where he was awarded the Kenneth Kantzer prize for theology) and ministered on college campuses in Chicago with InterVarsity Christian Fellowship. The combination of Resurrection, Wheaton College, and InterVarsity provided a most dynamic training season for the ministry. Here he learned how to lead (especially in regard to vision and liturgy), how to minister in the power of the Holy Spirit, and how to read and preach God's Word and to study the teachings of the Great Tradition.

Stewart became rector of Resurrection in the winter of 1999 and in September 2013, he was consecrated Bishop of the Anglican Diocese of the Upper Midwest (ACNA), and has a vision to see a Revival of Word and Sacrament infused by the Holy Spirit in the Upper Midwest.