Since 2008, the Archival Research Lecture has served to showcase the broad depth and variety of resources held by Buswell Library Archives & Special Collections and to shed light on the process researchers use to construct historical narratives from these unique materials. 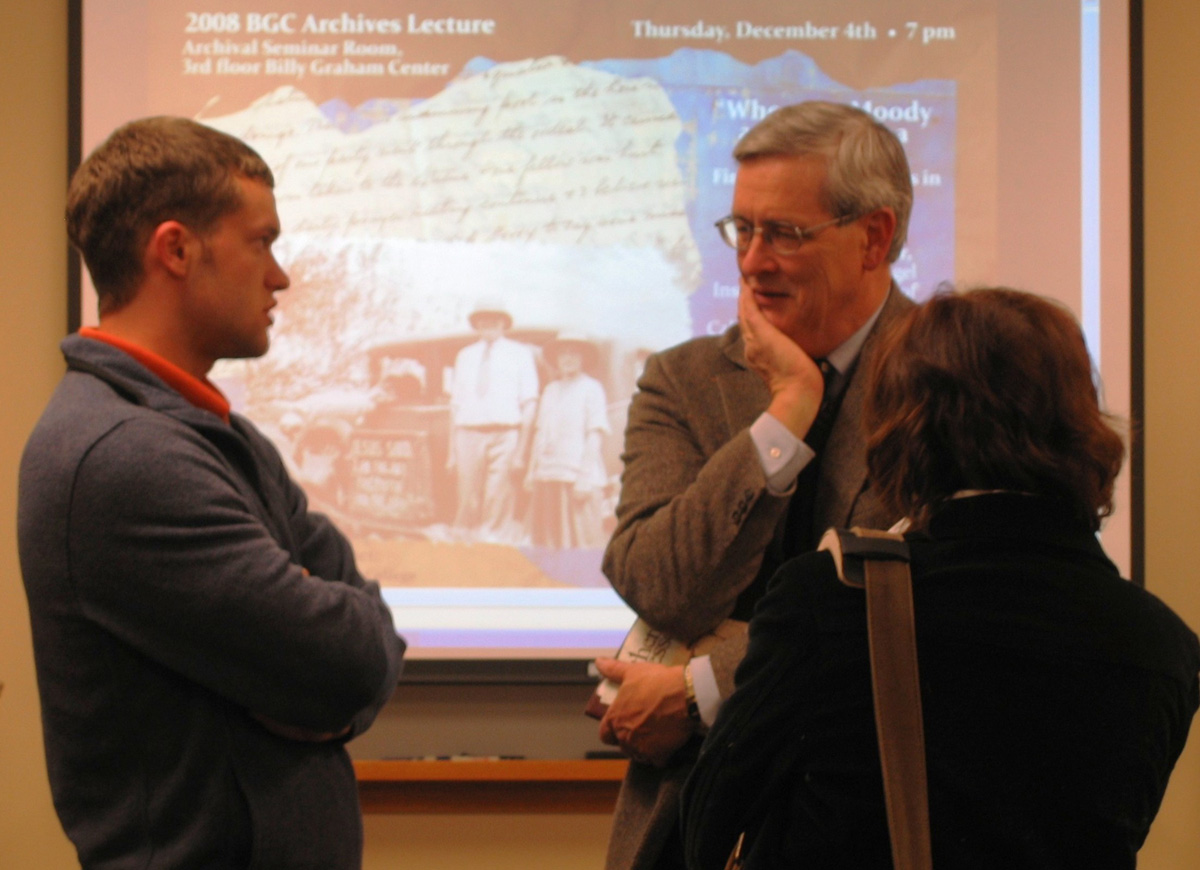 This annual lecture series has traditionally been held in the fall semester before mid-term break and is sponsored by Buswell Library Archives & Special Collections with support from the now defunct Institute for the Study of American Evangelicals. The lecture is open to the Wheaton College Community and the broader public and is typically followed by a reception and exhibit of archival materials related to the lecture topic.

Explore the links below to learn more about each annual lecture and to hear an audio recording of the event.

Throughout the twentieth century, evangelicals, like Chuck Colson and Bill Glass, founded new prison ministries and developed novel forms of prison outreach. These ministries were wildly successful in transforming the practice of religion in American prisons but faced challenges negotiating the brutal inequalities of the carceral state and complex religious diversity of American prisons. For the 2022 Archival Research Lecture, Aaron Griffith explored this evangelical prison movement and its associated complications, with an eye toward future possibilities for evangelical ministry and advocacy on behalf of incarcerated people.

For the 2021 Archival Research Lecture, Dr. David Kirkpatrick tells the story of how a Cold War generation of Latin American evangelicals, including Wheaton graduate René Padilla, developed, named, and exported their version of social Christianity to an evolving coalition of global evangelicals. These global negotiations reshaped politics, widened theologies, and provoked an explosion of mission and relief organizations such as Compassion International and World Vision.

For the 2019 Archival Research Lecture, Dr. David Swartz examines the beginnings of Evangelical humanitarianism after World War II. In this Cold War myth of origin, American evangelist Bob Pierce added social justice to the anticommunist arsenal of Evangelicalism at mid-century through the founding of World Vision. But this is not the whole story. Viewing the organization’s early years through a transnational lens illuminates the role of World Vision’s Korean co-founder Kyung-Chik Han, a monumental figure in global Evangelical history whose memory has been forgotten in the United States.

Music took center stage in every Billy Graham crusade, under the leadership of Cliff Barrows and George Beverly Shea. In this 2018 presentation, historian Edith Blumhofer explores how archival sources provide an overview of crusade musical continuity and change for more than sixty years. Dr. Blumhofer’s research also examines the developing roles of music in evangelism from D. L. Moody to Billy Graham and uncovers the impact of crusade music on musical practice in congregations around the globe.

The deaths of five missionaries in 1956 at the hands of the Waorani (“Aucas”) was the defining missionary martyr story for American evangelicals during the second half of the 20th century. Much less well known is what happened in Ecuador after the men’s deaths. In the 2017 Archival Research lecture, historian Kathryn Long reconstructs the part of the story that was largely untold and discusses the discoveries and challenges of using archival research to create a historical narrative.

Billy Graham (1918-2018) ranks as one of the most influential Christians of the 20th century. In the 2016 Archival Research Lecture, Grant Wacker suggests that Graham’s achievement lay in the blending of two streams. The first consisted of exceptional personal gifts, including looks, voice, poise, sincerity, integrity, professional ambition, and personal humility. The second stream involved his uncanny ability to adapt trends of the age for his evangelization and moral reform aims. Those trends included the “Southernization” of American culture, the rise of mass media, and the post-World War II quest for consensus, among others. The lecture will consider how the two streams, flowing together, helped a farm boy become the pre-eminent leader for many years of the evangelical movement in the United States and in many other parts of the world.

In the 2015 Archival Research Lecture, Dr. Steven Miller describes his own research experiences in the Archives and reflect on current trends in the study of the history of American evangelicalism.

In the early 1960s, Congo was in crisis. As the newly independent nation’s first prime minister was assassinated and violence wracked the country, a white American evangelical missionary was murdered in the streets of the capital city. The story of his death became national news, and U.S. evangelicals, white and black, struggled to understand the politics of race, religion, and revolution that led to his death, and which would soon transform U.S. policy in Africa as well as the global religious landscape of Christianity. Drawing on missionary letters, the Africa Inland Mission records, and other WCBGC Archives materials, in this 2014 lecture Melani McAlister explores the unexpected intersection between fears of communism and concerns about racism as American missionaries tried to manage their relations with fellow believers in Congo, as well as critics at home

In the 2012 Archival Research Lecture, Dr. Krabbendam examines the different responses in Europe and North America to the changing position of religion in society. Could the Europeans have adopted the strategies of Americans to prevent their religious decline? In particular he examines the confrontation between American evangelicals and Europe in the post-World War II period and illustrates when, why, and how Americans took to Europe to spread the gospel. This effort was more than exporting Billy Graham. It involved a great variety of groups and served multiple ends. Did American missionaries have a clear grasp of religion in Europe or were they a bit naïve? What was the result? Despite the fact that these missionaries did not reconvert Europe, their campaigns had significant consequences for themselves and for Europeans.

For the 2011 Archival Research Lecture, Amy Artman focuses on Kathryn Kuhlman, one of the best known evangelists in the United States during much of her ministry. However, few people know about the early career of this healing charismatic evangelist or how her later style was established in the television studios of the 1950s long before her show I Believe in Miracles went into syndication. Dr. Artman will describe her close study of Kuhlman's first syndicated television show, Your Faith and Mine, and what her research revealed about Kuhlman herself and the style of televised testimony she developed. The talk will also examine questions such as, "How does one televise a miracle?" "How does Kuhlman present herself and the miracles of her ministry in a way that is accessible to the broadest audience?" and "What effect does the use of media have on the communication of charismatic Christianity?"

In the 2010 Archival Research Lecture, Alan Bearman examines Billy Graham's 1954 Greater London Crusade, a 12-week phenomenon that propelled him to the attention of an international audience. It was an event fraught with political controversy and one that from a distance did not seem destined to succeed because of the hostility towards Graham within large sectors of the tabloid newspapers. But succeed it did because of Graham's commitment to his mission and his ability to win over the press. The 1954 Greater London Crusade was both a religious and political event unlike anything post-War Britain had experienced. Dr. Bearman's interpretation of the Crusade illuminates some of the reasons for Graham's global impact and offers a window into the history of modern British Christianity.

For the 2009 Archival Research Lecture, Uta Balbier examines the history of post-war Youth for Christ and Billy Graham’s evangelistic campaigns in Germany from the viewpoint of both the American and German participants: how the meetings challenged and influenced the identity of German Protestantism, the anti-Americanism and resentments that Graham was facing in Germany, and how and why these softened over the years.

In the 2008 Archival Research Lecture, Dr. Joel Carpenter discusses the shaping of American Protestant/Fundamentalist missions in the early part of the 20th century, a story he told in part in the 1990 book, Earthen Vessels: American Evangelicals and Foreign Missions, 1880-1980, which he co-edited. Dr. Carpenter will also describe how his experience using oral history interviews from the BGC Archives shaped his research and his thinking.

We on the staff have the privilege of meeting a wide range of scholars, Christian workers, and the general public engaged on many different types of research, from preparing a one-woman show, to filming a documentary, to fashioning a web site, to researching books, articles, and dissertations on a wide range of topics in Christian and secular history.... The purpose of the archival research lectures, which we hope to offer from time to time, is to give the Wheaton campus and community a chance to share in the adventure of learning about these exciting research trips and discoveries. We plan to ask people who have been digging ore from the Archives mines to talk a little about both their own experiences in the digging—the archival research experience and the ore they have found—the larger study of which the data from the Archives will be a part. And every talk will be followed by questions and general discussion. We hope this can be one way that the Archives can contribute to Wheaton's rich mix of knowledge, experiences and, above all, people.