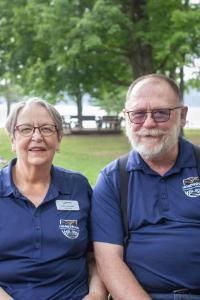 
We (Terri and Dan) started at Honey Rock in August 2010. Dan retired from Wheaton College after working there for thirty-four years; we came here as full-time volunteers. Terri grew up in Holland, Michigan, and Dan grew up in Hatley, Wisconsin, about eighty miles from Three Lakes. We have two children, Michele and Bryan, a son-in-law, Steve, a daughter-in-law, Stacyand have five grandchildren. Terri is the Camp Hostess and Dan works in Operations and Facilities.

Dan did not grow up in a Christian home. He asked the Lord to be in his life when he was stationed in Alaska with the Navy. His testimony is similar to Terri's in that he also heard a sermon about where one will spend eternity.

The thing we like most about working at HoneyRock is that we get to meet and serve so many people and love being around so many young, energetic, and Christ-centered young people.