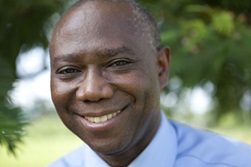 Rev. David Kasali, Ph.D. earned a Master’s degree in geography and education in Congo in 1980, and a Master’s in Divinity from Nairobi Evangelical Graduate School of Theology (NEGST) in 1987. David served as Coordinator of the department on Ethics, Society and Development of the Association of Evangelicals in Africa (AEA). During that time, he traveled extensively in the continent of Africa holding seminars with African pastors and theological educators to deal with issues that churches and societies face in Africa. In September 1989, David and his family joined Trinity International University (TIU) in Chicago, Illinois, where he graduated with a PhD in New Testament. Upon returning to Africa, David served for two years as a faculty member and eight years as President of Nairobi Evangelical Graduate School of Theology (NEGST), equipping pastors and Bible teachers for churches in Africa. While serving at NEGST, the Kasalis felt called to help rebuild lives, families and communities through holistic transformation. Together with local leaders in Beni, North Kivu, DRC, they created Congo Initiative (CI).  After three years of building partnerships with churches, institutions, and individuals who would come together to support the growing vision and goals of Congo Initiative, the Kasalis relocated permanently to Beni in 2007 to formally inaugurate CI’s Université Chrétienne Bilingue du Congo (UCBC – The Bilingual Christian University of Congo), which now has close to 500 students enrolled, over 400 alumni, as it enters its 10th year. David now leads the UCBC as Rector as well as fulfilling his role as President of Congo Initiative.