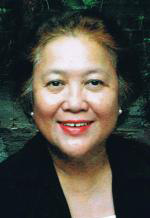 A writer and a social anthropologist, Melba Padilla Maggay is a sought-after international speaker and consultant on culture and social development issues, particularly the interface of religion, culture and development.

Dr. Maggay was research fellow at the University of Cambridge under the auspices of Tyndale House, and also served as Northrup Visiting Professor at Hope College, Michigan and Visiting Lecturer at All Nations Christian College in England. She has initiated and supervised various research projects and grassroots work as president of the Institute for Studies in Asian Church and Culture, a research and training organization engaged in development, missiology and cross-cultural studies aimed at social transformation.

She serves as lead consultant of the Institute in coaching and servicing the research and training needs of development and mission organizations, both local and international, like the World Bank. She is a three-time top-prize winner in the Don Carlos Palanca Memorial Awards, the most prestigious literary prize in the Philippines. Besides academic books, she writes fiction and wrote a zarzuela, “Bayan, Isang Paa Na Lamang,” a prize winner in the National Centennial Literary Competition held in 1998 to commemorate 100 years of Philippine independence.

As a social activist, she had been cited for her outstanding leadership in organizing the religious movements, particularly the evangelical Protestant presence, at the EDSA barricades during the Philippine ‘People Power’ uprising in February 1986.

Dr. Maggay has sat in the governing boards of both local and international organizations. She sat in the International Advisory Council of the Knowledge Centre for Religion and Development in the Netherlands ( 2007-2010 ), a tripartite partnership among ICCO, CORDAID and the Institute for Social Studies (ISS) in The Hague.

Likewise, she was founding board member of the International Life and Peace Institute, a peace research organization based in Uppsala, Sweden (1985–1990).

She is currently president of the Micah Global, an alliance of more than 700 faith-based development organizations worldwide.

This year's symposium schedule includes a wide variety of events including the plenary sessions, lectures, a poster session and many other activities.

Register Now for the 2016 HNGR Symposium!