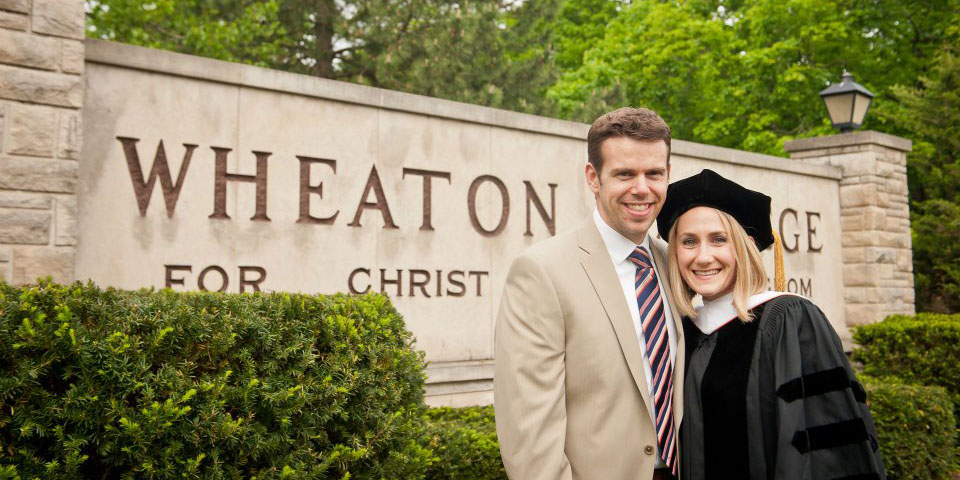 Laura and her husband, Jim Shultz, pose in front of the Wheaton sign on graduation day.

Of the four percent of American psychologists who have completed their board certification, Laura Shultz, Psy.D. ’12 ABPP is one of them. Getting there has taken her down a meandering path, one marked by learning how to incorporate her faith into her work.

Laura’s journey first began during her time as a student in a Ph.D. program in Houston. “It was a challenging and painful experience,” she explained. “I felt like who I was would be fundamentally altered by some of the worldviews of the faculty. I didn’t think I could do it for five years.”

Laura knew it wasn’t where she was meant to be. She changed courses and completed a master's degree in counseling at a seminary. A few years later, she decided it was time to pursue her doctorate in clinical psychology again.

Wheaton’s Psy.D. program had been on Laura’s radar since her undergraduate years. Six years later, it was her first choice of program. “I look at this long road, and I see how God used every one of those steps. I’m so thankful that I ended up at Wheaton. It was really a good place for me,” Laura said.

When Laura began her career as a neuropsychologist, she worked at a for-profit company that cared for patients in nursing homes. During those few months in that position, she battled with her career trajectory. “I wanted to be serving the underserved. I was asking the Lord what he wanted me to do,” Laura said.

Just as she had experienced as a student, Laura realized that she wanted to be in an environment where she could incorporate her faith into her practice.

That was when a door was opened for her to work with a Christian, federally qualified health center. Laura built a behavioral health program for the organization, and has since moved to another healthcare network to implement a similar program.

Though the switch from neuropsychology to primary care program development was unanticipated, Laura’s current career calls back to her Psy.D. days; for her dissertation, she created a program for veterans to help mitigate post-traumatic stress symptoms throughout deployment.

Her latest venture has been obtaining her board certification. Laura always knew that she would eventually pursue this final check, thanks to encouragement from her mentors over the years. “I chose to do it simply to have the experience of being examined and to learn from the other board certified psychologists,” she said. “It helps you fine tune and learn as a professional.”

The process was arduous and took three years between the credential review, the written exam, and the oral exam. Now that it’s over, she’s glad to have done it. The hard-earned certification indicates that Laura passed a rigorous examination of her ethics and practices.

“I know that each of my steps—even though some of them were really hard—God has used to shape me,” Laura said.

I know that each of my steps—even though some of them were really hard—God has used to shape me.