A glimpse into the community found within Wheaton’s quarantine residence 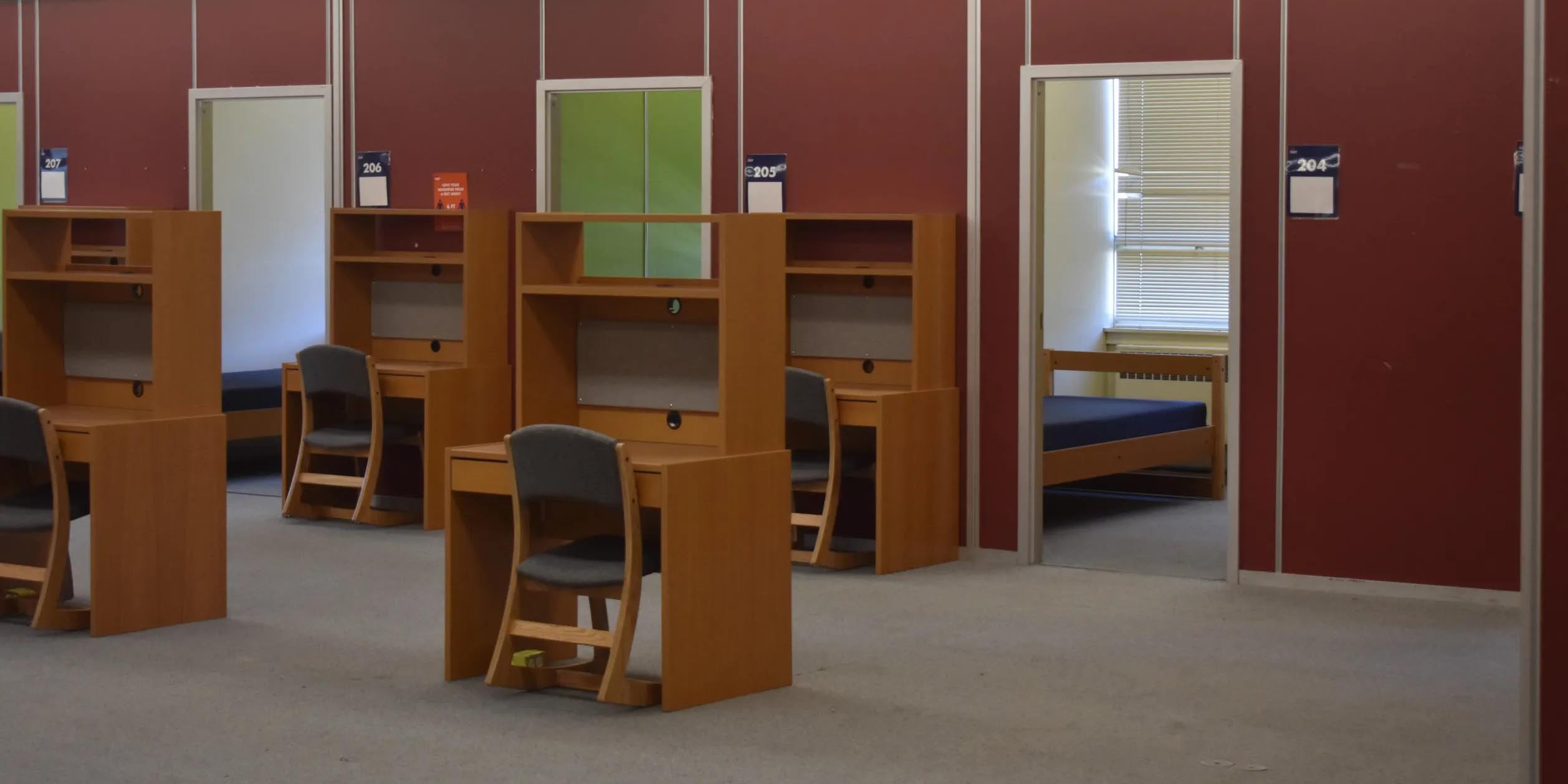 Desks line the walls of a communal study area in East Campus.

Situated one mile from the heart of Wheaton College stands East Campus, a lone office building seemingly unexpected among neighborhood streets. What was once an administrative building, then an additional storage space for the College, has been given yet another purpose. Since its first guest in March 2021, and as of the writing of this article, 153 students have spent their COVID-19 isolation period at East Campus, which now serves as a residential quarantine facility. Despite the subdued atmosphere and underlying illness that pervades such a space, the building has defied all odds and become the unlikely source of new friendships and a rich community as students seek to make the most of their temporary stay.

Before COVID struck, few students knew East Campus existed, shrouding the building in a veil of mystery. “Before I got to East Campus, I really didn’t want to go,” senior Blake Chaput admitted. “I couldn’t imagine spending five days in this weird building that I’d never visited.”

Senior Riley Hobby described a similar eerie feeling. He arrived early one morning and at a time when the East Campus population was sparse, with less than 10 people lodging in the building. “It was funny first getting there,” he said. “When I showed up, the lights were off in the main area, and it was really dark. It was just a giant space with nothing in it.”

However, as more students passed through East Campus over the following weeks, the ghostly building sprang to life, even undergoing some colorful student-led renovations in the way of decor. Some students wallpapered a pillar in the common area with paper towels, and it has since been signed by each student that inhabits East Campus. 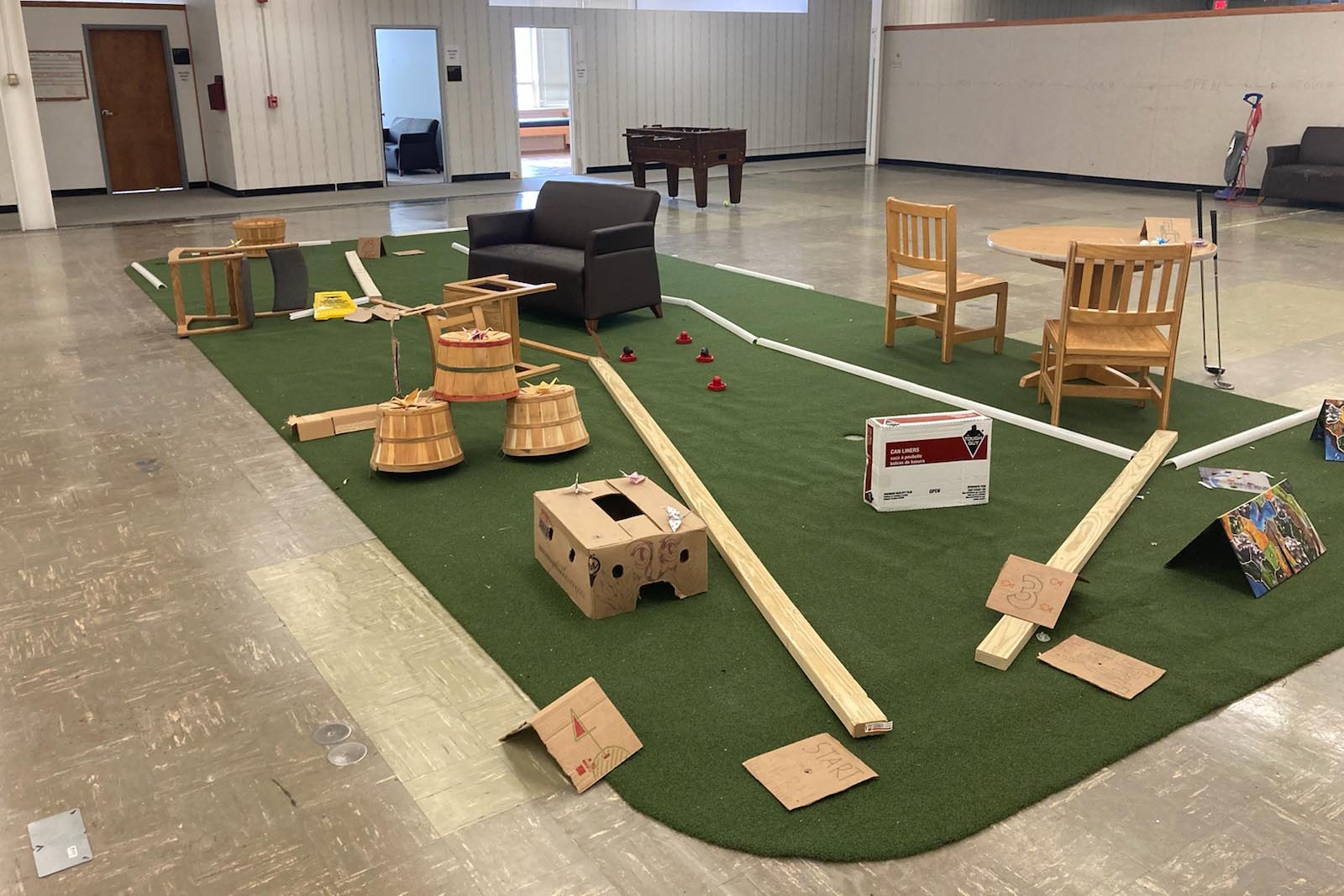 And then there was the mini golf course.

“I have always had this dream of turning my floor into a mini golf course,” Chaput said. A stay at East Campus gave him the chance to make his dreams come true. By a stroke of luck, one student stumbled across a massive piece of astroturf with golf holes already cut into the material. “We dragged the big green into the common room, rolled it out, and everyone started pitching in to make this mini golf course. It really became our project,” Chaput described. They dubbed it “Pandemic Putt-Putt” and held two tournaments, complete with homemade medals for the winners.

While the living quarters are functional, it’s clear that East Campus was not originally designed to be an apartment complex, or even a comfortable dormitory. Old offices serve as bedrooms, giving each student several square feet to call home for five to seven days. Men and women are split into separate wings for sleeping, but share common space for studying and eating. The main room is filled with tables and chairs and features carpeted walls, tall ceilings, and concrete floors reminiscent of a warehouse. A quiet study area is partitioned off with beige cubicle dividers.

East Campus, along with multiple other campus spaces such as a few Michigan-Crescent apartment units, was set aside for quarantine space in response to the CDC guidelines and Illinois state law. Maintaining residential learning meant careful observation of the governing policies. These included enforcing indoor masking, social distancing, avoiding large gatherings, and establishing extra-cautionary measures such as grab-and-go meals, plexiglass dividers, and communal cleaning supplies.

Junior Claire Miller stayed in East Campus for a few days, and while she was there, observed the influence of Wheaton’s community-centered culture on the building’s design. “What was considered private was very different [from typical residential spaces],” she said. “Lots of people had office dividers walling off their rooms, but you could still see in. There weren’t locks on the doors. Wheaton culture impacted that; people don’t steal stuff, and people are generally comfortable living in community together.”

An empty bedroom in East Campus that features paneled walls and hardwood floors.

Despite their collective illness and separation from the rest of campus, students at East Campus forged communities of their own over games of mini golf, cards, puzzles, Spikeball, Mario Kart, and ultimate frisbee on the lawn. Many groups engaged in nightly dinners together, sharing the complimentary meals Bon Appetit provided, or ordering delivery from nearby restaurants. Others often gathered for times of communal worship and prayer. They also rallied to celebrate student birthdays if it happened to occur during isolation. Although these students were mostly strangers, they chipped in to acquire cupcakes and other treats to celebrate one another.

“It’s awesome that the community we created wasn’t just fun, but it was also meaningful,” Hobby said. “[Those relationships] at East Campus were a reflection of the ways that we’ve tried to overcome,” Hobby said. “We could still build community, be joyful, and find creative ways to enjoy one another’s presence.”

Students residing at East Campus were monitored with phone calls and emails from Student Health Service (SHS) staff. Methods of care varied on a case-to-case basis, but over-the-counter medications were readily available for combatting symptoms. SHS Director Beth Maas Walsh ’95 expressed that in her communication with quarantined students, she was consistently impressed with their graciousness and joy amid a hard and often disappointing situation.

“Overall, Wheaton has navigated the COVID pandemic excellently in that we were able to stay in school,” added Dean of Residence Life Dr. Justin Heth M.A. ’07. “We did everything we could with the CDC and state restrictions that were required of us to provide the best opportunity for as full a Wheaton experience as we could.”

Although COVID has waged a long and tiring war, Wheaton’s student body has persevered time and time again. East Campus presents a clear illustration of the paradox that shaped the people of Wheaton during COVID: Even in quarantine, community can be found.

“Quarantine turned out to be a really sweet time when I got to grow relationships with people that I might have never met outside of East Campus,” Chaput said. “It wasn’t all sunshine and roses, but that added to the feeling that we were all in this together.”