How a team-first attitude leads Nyameye Adom ’21 and the men’s basketball team to victory.

“Nyameye is a winner,” says head men’s basketball coach Mike Schauer. Nyameye Adom ’21, a computer science major from Orlando, Florida, certainly earned the title after a game-winning half court shot over conference rival Illinois Wesleyan University last season. The highlight-worthy heroics weren’t a surprise to Adom’s teammates and coaches who had seen him rise from injured reserve to the team’s leading scorer.

Long before the buzzer beater, Adom experienced a significant setback to his basketball career. On his first day of practice in a Wheaton jersey, he went down with a knee injury that caused him to miss the rest of his freshman season. In spite of the disappointment, Adom worked hard to return to competition with his teammates.

One year later, Adom began practice again with the squad that would go on to compete in the NCAA Final Four game later that year. He credits the team dynamic for much of its success, saying, “When people just care about themselves, it really shows on the court. On this team, everyone’s thinking what they can do to help the team win.”

On and off the court, the unanimous All-Conference selection and All-Region performer embodies the heart and soul of Wheaton’s men’s basketball program. Now a team captain, Adom carries on the same team-first attitude that drew him to Wheaton as a high school recruit.

Coach Schauer notes that Adom’s skill and selflessness are a rare combination. “His biggest influence on our team is probably off the floor. His teammates love him and love being around him. That isn’t always easy when you are a player as good as Nyameye has become.” 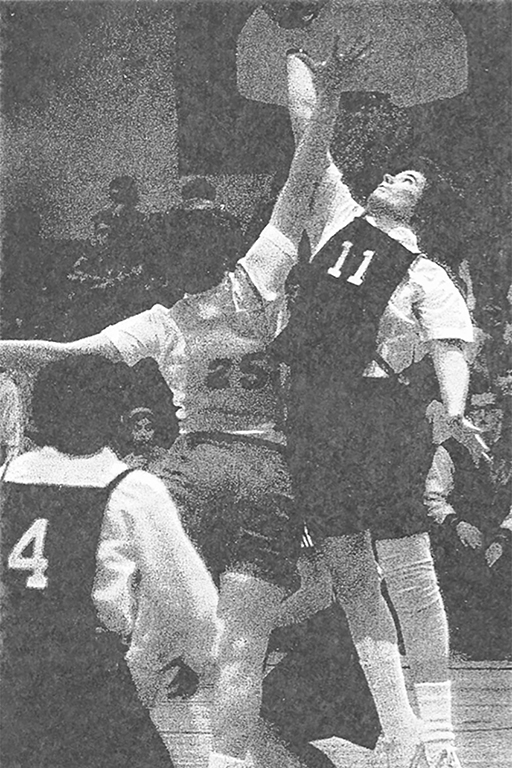 Bea Gorton ’68, during the 1967-68 undefeated season, led the women’s basketball team in scoring, with 182 points, and she had a personal best of 33 points against Concordia, setting a single-game record in that category which remained for 15 years. She was also the team’s leading free throw shooter, connecting on 68 percent of her attempts. Gorton also coached the Wheaton women’s basketball team in 1969-70, posting an 11-1 record, and went on to become the first head women’s basketball coach at Indiana University (1972–76). She was inducted into the IU Hall of Fame in 2014.