“You’re supposed to be safe at church,” Professor of Music Dr. Shawn Okpebholo reflected. “But the bombing happened there.”

“Two Black Churches,” a new composition by Okpebholo, was premiered this summer by baritone Will Liverman ’10 and pianist Paul Sanchez, depicting two atrocities, 60 years apart, against Black churches at the hands of white supremacists.

The first movement is based on Dudley Randall’s poem, “The Ballad of Birmingham” (1965), a narrative account of the 1963 bombing at 16th Street Baptist Church in Birmingham, Alabama, that killed four young girls. In the poem, a girl wants to participate in a freedom march, but her mother sends her to church instead. Paradoxically, a place of safety becomes a place of death. “It’s a heartbreaking poem,” Dr. Okpebholo said. “I believe that as soon as you add text to music, it becomes the most important part. So, I just sat with that text for a long time. And then I wrote the music.”

The second movement portrays the 2015 mass shooting at Mother Emanuel African Methodist Episcopal Church in Charleston, South Carolina, that killed nine parishioners. The movement centers around the poem “The Rain,” written for the composition by Charleston Poet Laureate Marcus Amaker. In his program notes, Dr. Okpebholo says the poem “is a beautifully haunting metaphor on racism and the inability of Blacks in America to stay above water—a consequence of the flood of injustice and the weight of oppression.” Musically in the second movement, nine chords represent the nine people who died that day. The progression repeats several times during the movement, starting low and ascending. “This is symbolic of going to heaven,” Dr. Okpebholo said.

In describing the tone of the piece, Dr. Okpebholo said he draws on Baroque musical techniques in terms of ornaments. However, the melodies and harmonies are more similar to contemporary Black church music traditions. The composition features musical quotations of the Civil Rights anthem, “We Shall Overcome,” as well as the classic hymns, “Amazing Grace” and “’Tis So Sweet to Trust in Jesus.” The latter was sung to conclude the first church service held at Mother Emanuel after the shooting occurred.

“To me, that represents the hope and faith that Black Americans and the Black church still hold onto in the face of tragedy,” Dr. Okpebholo said. 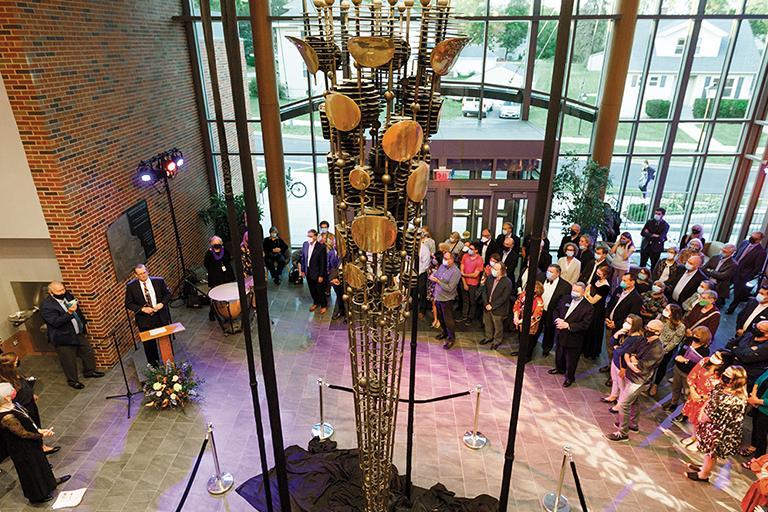