How beautiful upon the mountains
are the feet of the messenger who announces peace
who brings good news,
who announces salvation,    who says to Zion, “Your God reigns.” 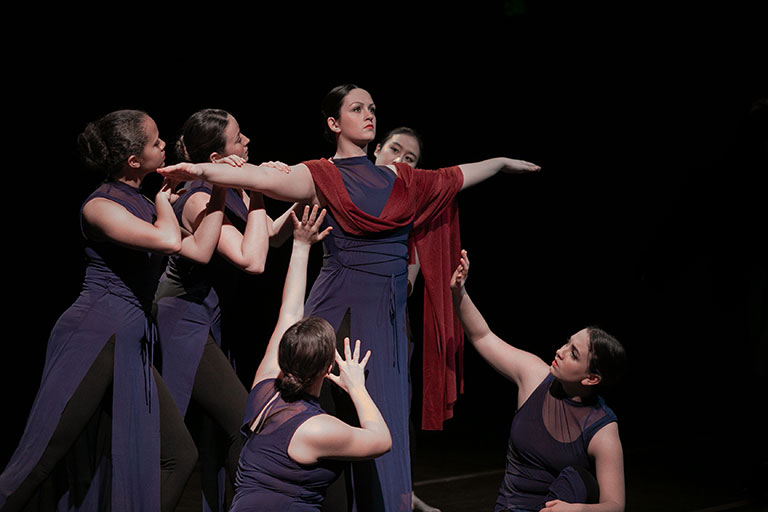 Members of Zoe's Feet during a Fall 2019 performance

At the age of 16 years old, my world came crashing down in an unexpected way. I was a junior in high school, and a botched routine surgery had left my mother’s life hanging in the balance. The care she needed required her to be in one state while I was in school in another. The last of three children at home, I began the process of completing high school one year early in order to join my brother at Westmont College in the fall. As I took my first steps into college life, dance became a refuge.

I had been smitten with dance from the first moment I saw a professional performance. I was three years old at the time attending the American Ballet Theater’s version of The Nutcracker in Los Angeles. I sat on my knees at the edge of my seat, enraptured by the music of Tchaikovsky, the colorful intricacies of the costumes, and the beauty of classical ballet movement. As soon as it was over, I turned to my mother and asked, “Can I do that too?” From that point on, classical ballet became part of my life.

After a dozen years of training in the Russian Vaganova method, a classical ballet technique, I eventually moved up the ranks to company dancer in our city’s ballet in Texas along with childhood friends that I continue to hold dear. We were growing up at the ballet bar with summer intensives run by professional companies, including the Dance Theatre of Harlem. One of us went on to dance for the New York City Ballet’s corps de ballet.

During that time, the most influential ballet master of our training proved to be Victor Moreno (1928-2010). Mr. Moreno, who was born in Argentina and had been a principal dancer of the Ballet Russe de Monte Carlo, was honored at the 2007 Men of the Ballet Russes event in Los Angeles. Mr. Moreno shared similarities with the ballet master depicted in Edgar Degas’s famous painting, The Ballet Class (1874), housed at the Musée d’Orsay in Paris. Just like in the painting, he also wielded a large, thick, wooden stick during class sessions. It allowed him to keep time with the music, lift our legs higher than we thought they could go, and remind us—with a light tap—to hold in our stomachs when we were too relaxed. The training was rigorous, but it provided an avenue for fostering friendship and directing my creative energy. Week in and week out, ballet strengthened and elongated our limbs as the repetition of movement generated muscle memory and a heightened sense of our body’s placement. Through performance we learned confidence, poise, and endurance. The art of ballet was transforming our body and building our character. In college, I would discover that the gift of dance was even more profound than I knew. 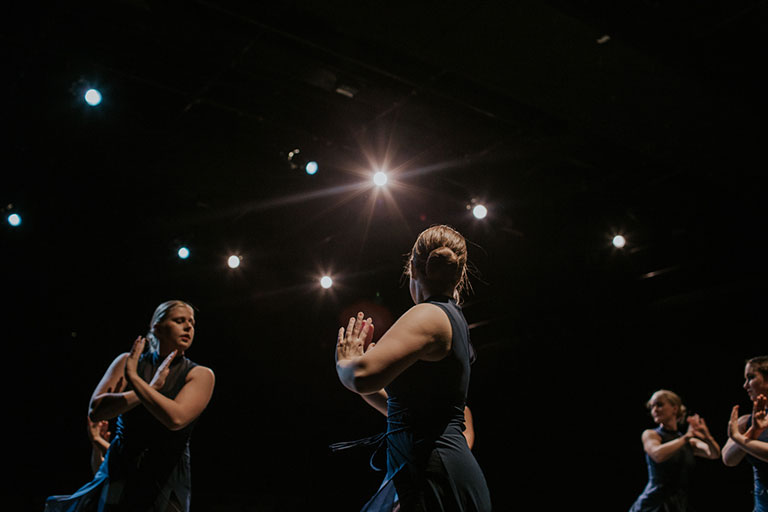 Growing up among evangelicals of the Presbyterian variety, dance was not entirely frowned upon. In fact, my first opportunity to bring ballet into the worship context was for a Maundy Thursday service at my church, but invitations like that were few and far between. On the whole, the intersection of dance with Scripture and theology was an unexplored topic in my context. In its most elevated form, dance was merely artistic expression when not valued as entertainment, exercise, or even competition.

It is not an exaggeration to say that my relationship with dance was transformed by Professor Erlyne Whiteman ’71, who earned a B.S. in physical education from Wheaton College and a Ph.D. in dance from the University of Southern California. Whiteman was trained in Martha Graham’s modern dance technique as well as jazz, swing, and ballroom. In 1991, her expertise in sacred dance led her to establish the Westmont College Windancers (meaning spirit-filled dance). In the late ’90s, as I pursued my B.A. in religious studies at Westmont, I joined the Windancers as one of the few classically trained dancers.

Under Dr. Whiteman’s leadership, dance became more than mere choreography and the mastery of technique. We were forging the link between dance and worship in chapel and for churches in the region. We were digging into Scripture to explore the role of dance and music as well as delving into the theology of the body. Biblical texts such as Exodus 15:20—“Then the prophet Miriam, Aaron’s sister, took a tambourine in her hand; and all the women went out after her with tambourines and with dancing” (NRSV)—took on new dimensions. For us, Miriam became more than Moses’ sister. Her response to God’s saving act at the Exodus—along with King David’s dancing before the Lord (2 Sam. 6:14), the affirmations of the Psalms (149:3), the Feast of the Prodigal Son (Luke 15:25), the “leaping” of the lame beggar (Acts 3:8-9), and more—became an open door for experiencing dance in a way that was biblically rooted and theologically formed. In a word, dance became a refuge for me when I began to understand it through the lens of Scripture and as part of a theology of worship.

It was truly a paradigm shift. We were invited to live, breathe, and feel the truth of dance as worship. My approach to training, choreography, and performance was fundamentally transformed by a reordering of priorities. Aesthetics began to work in concert with communicating the scriptural foundation and theological function of movement in the context of worship. Dance was now prayer and the proclamation of the Word, and consequently, it began to deeply enrich my faith and my ministry whether I was teaching Westmont’s classical ballet class (during my senior year) or preparing choreography for my senior show.

As it turned out, this maturation of my heart and mind for Christ through dance was part of how the Lord was preparing me to serve at Wheaton College.

I arrived at Wheaton in 2008 to start teaching in the School of Biblical and Theological Studies. As a newly minted Ph.D. graduate, as well as a first-time mother with a brand-new baby, ballet and dance had all but been removed from the rhythms of my life. I longed to rediscover a way to invest my love of classical ballet and sacred dance. I longed to move my feet again!

In 2011, Wheaton’s newly organized dance ministry, Zoe’s Feet, found me in God’s perfect timing. When Carolyn Goss ’11 emailed asking me to serve as the first faculty adviser of Zoe’s Feet, I didn’t miss a beat in accepting the position. God was putting dance back into my life in an unanticipated way. I was going to pass on a legacy at Wheaton that had once shaped me years ago at Westmont.

Zoe’s Feet is named after Isaiah 52:7: “How beautiful upon the mountains are the feet of the messenger who announces peace, who brings good news, who announces salvation, who says to Zion, ‘Your God reigns.’” (NRSV). The vision and mission of the ministry takes its inspiration from this passage so that everything is done according to the understanding that dance can proclaim the good news of the gospel, which is life (zoe means “life” in Greek) in Jesus Christ. There is no better message to proclaim.

One of the greatest joys and privileges of my time at Wheaton thus far as a faculty member has been advising Zoe’s Feet in the development of its ministry, mentoring dancers, promoting the arts on campus through dance, and contributing to the integration of faith and dance. I have been in a position to travel with Zoe’s Feet as it headed to New York City to proclaim Christ through dance in Times Square, to support its partnership with Preston Taylor Ministries in Nashville, and to help foster its work in the local community through collaboration with Victory Sports. All this has been possible because of exceptional student leadership and college support—particularly through the work of Jared Falkanger in the Office of Christian Outreach. Come and watch Zoe’s Feet Chapel or Confessions to glimpse how the Holy Spirit is working to bring the Good News to others by the feet of these dancers.

There is no better time to value the beauty, depth, and power of dance as worship than in these strange days of the pandemic. Collectively—globally—we are more aware of our bodies. Recent experiences of being housebound have taught us what it means to long to move beyond the spaces that contain and constrain us. Technology has given us a way to maintain work and relationship, and yet, we have also come to appreciate that there is no substitute for physical presence.

As Christians, we boldly proclaim that our bodies matter—that God created them to be good (Gen. 1:31), that in Christ they are new creations (2 Cor. 5:17), that they serve as the temple of the Holy Spirit (1 Cor. 6:19), and according to our belief in the bodily resurrection of Christ, that they will be restored and granted eternal life with the Triune God (1 Thes. 4:16-17). Our feet were made to move and to bring God’s good news to others. May we move, then, to the glory of God alone.