Beauty in the Ordinary

In her artist’s life as a poet and curator in Scotland, Mattea Gernentz ’20 draws from a storehouse of literature, history, and her own personal memories to inspire those around her to find meaning beyond what first meets the eye. 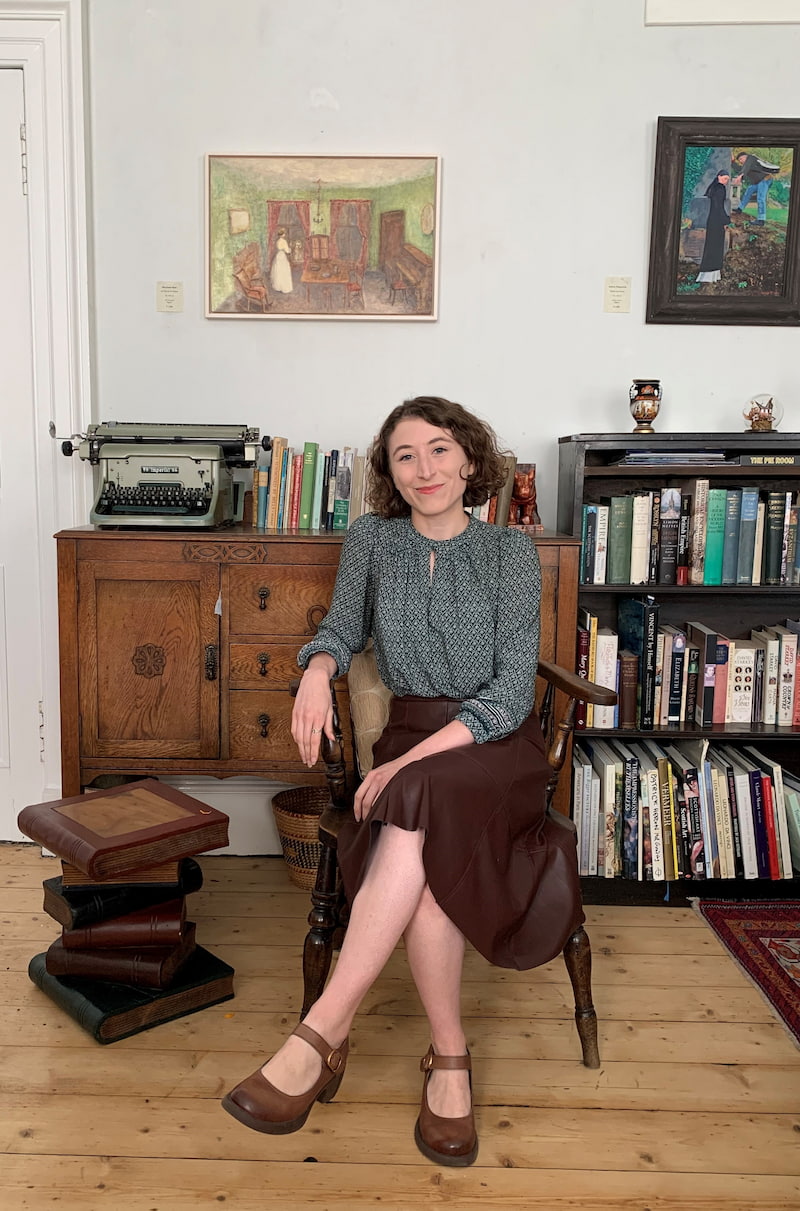 “Because life in itself is so varied, I think my poetry reflects that. Whatever inspires me, I just tend to write about.”

Mattea Gernentz ’20 watched, fascinated, as a group of elderly women toured an art gallery where she was serving as an attendant. They were sight-impaired and were interacting with art in an unusual way—through touch—which no other visitors were allowed to do. As she watched, Gernentz felt inspired to write about them:

Beyond Sight
By Mattea Gernentz

and they were so patient (as I have
never been), aglow with curiosity,
nodding yes, yes, this is it, of course,
fingers probing seams and shapes

Like the women she observed that day, Gernentz finds joy in these spaces. Art galleries, museums, and libraries—“these are spaces that felt like home to me,” Gernentz said. As a child, she’d enjoyed exploring galleries and exhibitions, but felt there was a limit to her participation. “It was almost as if they were spaces that already existed in their curated form, like I didn’t really view them as flexible or malleable or as something that you could be involved in,” she explained.

When she arrived at Wheaton, Gernentz decided to major in English literature and psychology, drawn to the significance of storytelling in both disciplines. Although she enjoyed studying both subjects, she encountered limitations when it came to future application and career paths. After a challenging lab practical and watching copious footage of rats in Foundations of Neuroscience, she began to question her planned trajectory in clinical psychology. “Nothing felt quite right,” she remembered. “I just didn’t derive that same sense of joy from it.”

It wasn’t until she had the opportunity to attend Wheaton’s “Arts in London” trip, co-led by Associate Professor of Art History Dr. Matthew Milliner, that Gernentz saw her future more clearly. She remembers how Dr. Milliner was rushing them around the art galleries and excitedly describing each piece of artwork when she felt like a lightbulb went off in her head. “It wasn’t until that trip, when I saw the widespread accessibility of the arts within the U.K., that I was able to grasp that this is a field you can work in,” she said.

The following summer, Gernentz interned with the Frist Art Museum in Nashville, Tennessee and she finally felt her “passions synthetizing.” She decided to move to the U.K., where she first discovered that passion for art curation, and attended the University of St. Andrews in Scotland for her MLitt in museum and gallery studies. After graduation, she knew she wanted to stay in Scotland and accepted her current position as an art curator at the BirdsNest Gallery in Edinburgh.

But this year, Gernentz will not only be a part of curating galleries—she will see her own poetry on display.

Poetry has been a constant in her life since high school. She loves that she can write about any thing, any time. Even if she only has a short break, she can bring her writing to a sense of completion. “Because life in itself is so varied, I think my poetry reflects that,” Gernentz said. “Whatever inspires me, I just tend to write about.”

Living in Scotland has given Gernentz a chance to explore this passion further. She was recently honored as one of the “Next Generation Makars” by the Scottish Poetry Library. As part of this distinction, she’ll be mentored by an experienced poet and have her work displayed in the library. She also had the opportunity to perform at the Dandelion Festival in Scotland, a three-day series of performances by local artists.

Some of her most common themes include memory, her gendered experience as a woman, her faith, and loss. These also seem to be common themes she approaches in her work at the gallery.

For example, the first exhibition she helped curate focused on Scottish female artists. The two rooms of the gallery contrasted contemporary pieces by female artists with works from a male perspective. Her second exhibition compared the works of two artists who portray “bonds of love.”

A recent piece Gernentz helped acquire is a Victorian painting featuring a woman with her hands clasped at her heart, gazing upward. Even though the gallery is not religious, Gernentz sees a spiritual significance in many of the works like this one. With this piece on permanent display in the gallery, Gernentz can see how some may also consider the divine love of God as one interpretation present in the exhibit. “Not every visitor may walk away with that as having prominence or meaning to them,” she said. “But I can definitely read into some of the works and see a spiritual significance there.”

Daily, surrounded by beautiful visual and written art, there is no shortage of joy for Gernentz as she takes on new responsibilities. “Especially as a fresh graduate, for this to be my first job, I think it’s really been a dream come true,” she said. “It’s been a joyous thing.”