In honor of her service on the Board of Trustees, with faithful efforts to establish a hospitable place for minority students on campus, Dr. Ruth Lewis Bentley ’55, M.A. ’58 is the 2022 Alumna of the Year for Distinguished Service to Alma Mater.

Dr. Ruth Lewis Bentley ’55, M.A. ’58 served on the Wheaton College Board of Trustees from 1988–2002, though she remembers it took a good deal of coaxing to convince her to take on the role.

“I had spoken periodically in Chapel at the College, usually about race, and some people questioned why I always spoke about the same old thing regarding how to identify and correct racial discrimination on campus,” she recalled. “I said, ‘Because you’re always doing the same old thing!’ Even though I was invited several times, I resisted being on the Board for quite some time because it felt like a dead end to me.”

Yet time and time again, Black students came up to Dr. Bentley after her Chapel talks to share their gratitude that a Christian who was African American could be a visible authority on campus. It was inspiring, they said, and Dr. Bentley took that to heart.

The tide fully turned when two faculty members visited Dr. Bentley at her home on the south side of Chicago.

“They challenged me with something that really clicked for me: ‘You can’t make much change from the outside. If you really want to make change, you have to go where you can do it.’ That was what convinced me to say, ‘Okay. I’ll join.’”

From the outset, Dr. Bentley made it clear that her purpose in joining the Board was to move the College toward growth in addressing racial discrimination on campus. It wasn’t easy. Looking back, she acknowledges the limitations of board meetings. With a mere three hours every four months to go over carefully planned protocols and agendas, it could be hard to interject with new motions or ideas. Yet there remained no doubt in Dr. Bentley’s mind that the Lord knew what he was doing when he brought her into that room, however frustrating it felt at times.

“I do believe the Lord led me there,” she said. “That was his purpose. I couldn’t do everything I wanted to do in those meetings, but I found new opportunities to enact change on a person-to-person basis, through personal relationships with students and campus leaders.”

Her commitment to building strong relationships across campus was not lost on her colleagues.

“When I think of Dr. Bentley, I think of John 13:34-35,” said Dr. David Gieser ’71, a former chair of the Board of Trustees who served alongside Dr. Bentley. “Jesus said, ‘By this all people will know that you are my disciples, if you have love for one another.’ Dr. Bentley’s example of love as she lived her life informs our mission as a college and challenges us as individuals.”

A trailblazer in action as well as testimony, Dr. Bentley is no stranger to racial injustice and segregation. Growing up in Birmingham, Alabama, when Jim Crow laws were legally enforced, she and her Black peers were forced to sit in the back of the bus on the way to school, behind a glass panel that physically separated riders. She had to scramble out of the way when a white person passed her on the sidewalk. White churches and Christian educational institutions were also segregated in the south.

“Mercifully, through God’s grace, enough of my father’s and mother’s Christ-centered attitudes rubbed off on me, so that I still believed I could work, live, and worship with white people,” Dr. Bentley said. “God somehow loved these people who were hurting us. I couldn’t bus with them, but I could love them.”

When the time came to attend college, Wheaton College stood out to the Lewis family as one of the few Christian institutions that enrolled Black students. In 1951, one sweltering summer day in Birmingham, she packed up her life and moved north. “I thought I was going to heaven on earth,” she said. After a heavy silence, she added, “It was not that.” 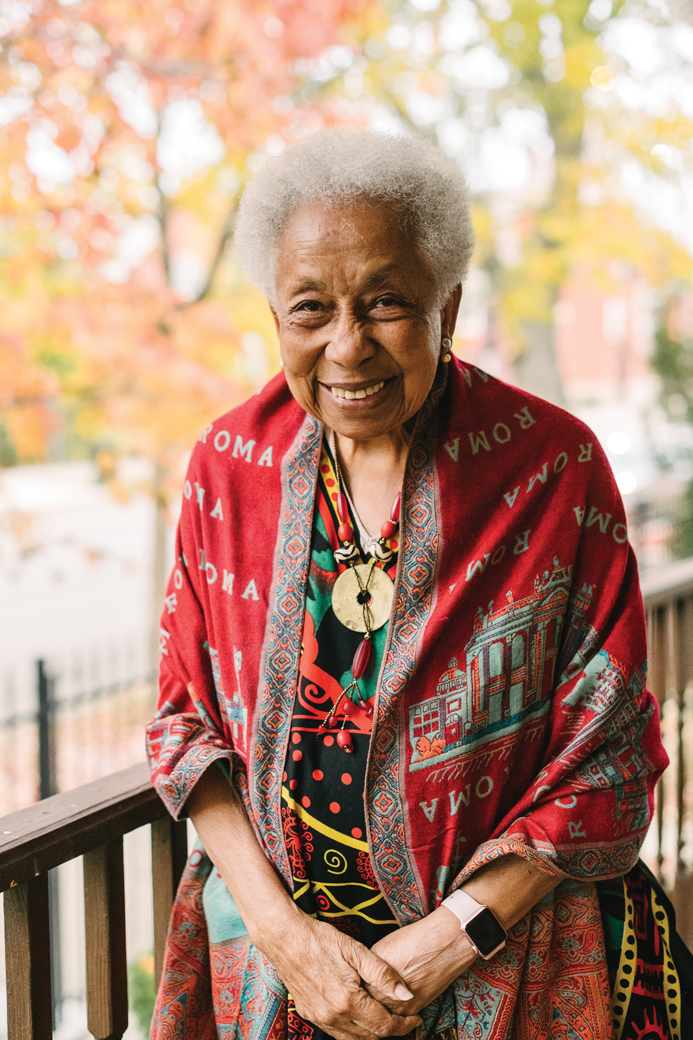 Dr. Bentley minces no words when documenting the outright racism she experienced as a student in the 1950s. She was denied certain housing privileges and prohibited from performing publicly with a choral ministry group she was involved in. She also daily navigated the mental and physical strain of being one of the few non-white students on campus. But Dr. Bentley was a fighter, whether that looked like speaking up for herself in housing meetings or walking out of the room at just the right moment if someone accused her of just wanting to break the rules. She also quickly established herself as an accomplished intellectual. At the end of her sophomore year, she earned the highest possible GPA for an undergraduate, and she went on to graduate with highest honors.

When she left Wheaton in 1958, having earned both master’s and bachelor’s degrees in Christian education and ministry, Dr. Bentley became the first Black woman to serve on staff with InterVarsity Christian Fellowship, the national campus ministry. She earned her Ph.D. in counseling in higher education from the University of Alabama in 1966, during which time she completed a Fulbright Fellowship to conduct research in Australia, visiting 30 countries on her year-long trip home. She also worked alongside her late husband, William Hiram Bentley, who served as the president of the National Black Evangelical Association. She is the last surviving founder of that organization.

By the 1980s, Wheaton had begun making concerted efforts to build a more inclusive environment for minority students, faculty, and staff. Students spearheaded new organizations like the Office of Multicultural Development, the William Osborne Society, and the Gospel Choir; and staff like the late Rodney Sisco ’84 pushed for policy changes that would sustain diversity across a campus united by Christian faith. When she returned to the College in 1988, this time as a trustee, Dr. Bentley brought with her decades of championing young people in marginalized communities and entered an ongoing movement of change for minority students and staff at Wheaton.

“Long before I began my tenure at the College, Dr. Bentley was advocating for ongoing, strategic initiatives for kingdom diversity,” said President Philip Ryken. “As a national leader in the Black evangelical movement, she has been one of the key figures in leading us to become a Wheaton community that is more fully representative of Christ and his kingdom.”

Her legacy as an intellectual on campus set the stage for new generations of Black and African American women to do the same. As an undergraduate, Dr. Vanessa Quainoo ’81, now Wheaton’s chief intercultural engagement officer, received academic and spiritual mentorship from Dr. Bentley, and she emphasizes the indisputable significance of having someone like Dr. Bentley as a role model.

“Dr. Bentley is the perfect blend of moral character and confidence in her own identity,” Dr. Quainoo said. “I was intellectually validated by her studies and inspired by her absolute commitment to biblical truth. I have respected her and loved her, and continue to do my best to emulate her in many ways.”

Priscilla Barclay Kibler ’12, who was born and raised in the same church where Dr. Bentley has served for decades, was another student who grew under Dr. Bentley’s wisdom. Now a member of the Wheaton College Alumni Association Board of Directors, Kibler vividly recalls seeing photos of former trustees and feeling fresh boldness in her bones as she beheld the visual representation of Dr. Bentley’s determined, unabashed presence in the room, often as the only African American woman.

“Her witness of standing up for marginalized communities on campus and at church placed a stamp on my life,” Kibler said. “If I hadn’t known she was a trustee, it would have been difficult for me to step into this position on the Alumni Board. She paved the way for me to believe that change is possible. I can advocate for current students because I had someone advocate for me.”

Although she no longer serves actively on the Board of Trustees, Dr. Bentley maintains involvement as a trustee emerita, and her faithful commitment to building up new generations touches many corners of campus leadership. For administrators like Dr. Quainoo, campus work is kingdom work deeply informed by Dr. Bentley’s powerful prayer and influence, a gleaming thread stitched into the very fabric of the College’s commitment to kingdom diversity. “There are three key things Dr. Bentley taught me and my peers at Wheaton that inform my work today,” said Dr. Quainoo. “First, love and respect for God’s Word. Second, love and respect for ourselves as African Americans, knowing God created us with a beautiful purpose just as he created people of all other races and ethnicities. Third, she gave us the intellectual tools to be able to critique without being critical—to look at the landscape of social ills in our nation and identify what is unjust even as we serve a God of justice.”

Although there remains work to be done on campus and the world as Christians learn to love God and neighbor more fully amid racial differences, Dr. Bentley clings closely to Proverbs 3:5-6 as her life verse: “Trust in the Lord with all your heart, and do not lean on your own understanding. In all your ways acknowledge him, and he will make straight your paths” (ESV).

“God may direct you to an unpleasant path because he has a purpose, and you have to be willing to follow him wherever he leads,” Dr. Bentley said. “You have to believe that people have the ability to grow and that God is able to transform people’s lives. The change you may be looking for doesn’t happen overnight. But God is the God of eternity, and he can take as long as he wants. Keep going—he knows what he’s doing.”

Cows and Chickens and Sheep, Oh My!