Talk of the “increasingly polarized” political landscape in the United States is now almost a cliché, but The Weight of All Things shows us that such divisions, when militarized, could be desperately worse. In El Salvador in the 1980s, the forces of revolution on the left and order on the right were locked in a decade-long cycle of violence. The message of the gospel, hijacked by both sides but belonging to neither, speaks a different message. Whether in El Salvador or in America today, testifying to the lamb-like gospel requires lion-like courage. Benítez’s novel gives us an intimate portrait of such courage in the person of Nicolás.

Whether in El Salvador or in America today, testifying to the lamb-like gospel requires lion-like courage. Benítez’s novel gives us an intimate portrait of such courage in the person of Nicolás. — Dr. Matthew Milliner, Associate Professor of Art History

Still, in order for Nicolás to manifest such confidence, he needs the intervention of a mature disciple of Christ at a crucial stage in his early life. And because no such pastor or parent arises, (both Óscar Romero and Nicolás’s own mother have been killed), that disciple is the Virgin Mary herself, who points Nicolás throughout the novel to the Good Shepherd Jesus. After all, as we learn in the book’s final page, the adult Nicolás will eventually graduate from an evangelical university, when – we can imagine – his faith in Jesus, and not just Jesus’ mother, has matured.

But in the extreme conditions of war, where a tangerine can give the consolations of the unavailable Eucharist, Mary “translates” the gospel in terms this motherless boy can understand.  Mary in this novel is no theological debate. Instead, she functions as an evangelist. “God can raise up sons of Abraham from these very stones,” says Jesus, and in The Weight of All Things, a damaged statue of Mary does gospel work. But of course, Mary transcends this statue as well, appearing elusively to help and guide even when the physical object is left behind. Even better, the entire novel might be understood as an extended meditation on John and Mary at the foot of the cross. The cross in this case, however, is the suffering of El Salvador. And just as the youthful John and Mary held their vigil at Calvary, so Nicolás and the Virgin suffer with Christ through this horrible war.

How do Protestants and Catholics Differ Regarding Mary?

Those who wish to debate the important issues concerning Mary, whether or not she was immaculately conceived or whether she had children after she had Jesus, will be disappointed in this novel. None of these issues which have divided Protestants and Catholics take center stage here. Nevertheless, as the mature Nicolás would no doubt later have learned, there are differences between Protestant and Catholic belief regarding the Virgin.

Catholics, adding tradition to the Scriptural deposit, have deployed papal authority to proclaim two things about the Virgin Mary. The first, declared in 1854, is that she was free of original sin (hence the merits of Jesus were retroactively applied to her at the moment of her conception). The second claim, issued in 1950, insisted that Mary, like Enoch and Jesus before her, was assumed bodily into heaven. These declarations – the first of which the Orthodox Church also contests – unfortunately continue to be a stumbling block for Christian unity, as the Scriptural testimony for these doctrines are scant. Fortunately, what we agree upon unites us, namely that Mary, who gave birth to the divine Jesus, can rightly be called the Mother of God. (For more on this, see the attached short article from the latest edition of the Evangelical Dictionary of Theology).

Fortunately, what we agree upon unites us, namely that Mary, who gave birth to the divine Jesus, can rightly be called the Mother of God. — Dr. Matthew Milliner, Associate Professor of Art History

While most Protestants skirt the questions of Marian apparitions altogether, the Roman Catholic Church is unable to avoid it. Many in the Catholic church have claimed to have seen the Virgin Mary, but the Catholic church has only approved a small portion of these apparitions. These included apparitions at Lourdes, Fatima, Pompeii, Banneaux, Beauraing, La Salette et alia, and even one that was recently approved in 2010 in Wisconsin (Our Lady of Good Help). Still, as the Catechism of the Catholic Church puts it, such apparitions, “do not belong… to the deposit of faith. It is not their role to improve or complete Christ's definitive Revelation, but to help live more fully by it in a certain period of history.” 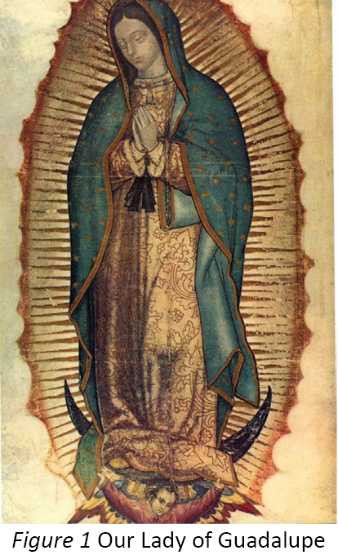 Evangelicals suspicious of these apparitions should be comforted by the fact that no Catholic has to believe them either, and some “apparitions” have famously proved to be frauds (such as Marpingen). There is no doubt that popular Marian culture can obscure genuine devotion to Christ. As Cardinal Raul Silva Henriquez of Chile complained at the Second Vatican Council, “in our countries of Latin America piety toward and veneration of the most holy Mother of God often enough takes on forms that do not have enough of a connection with the mystery of Christ and his church.” Surely the same could be said of aspects of popular evangelical culture today that can obscure rather reveal the mystery of Christ.

The most famous “approved” apparition in the Americas is Our Lady of Guadalupe, well described in this novel. The apparitions experienced by Nicolás might be described as a fusion of Guadalupe and Lourdes (where Mary appeared repeatedly to an individual girl). But unlike Lourdes, Mary is here less interested in communicating details about her conception than in protecting Nicolás. In The Weight of All Things, Mary is less “immaculate” than she is—like all Christians—broken. And she points constantly to Jesus the Good Shepherd who appears in the novel frequently as well.

In The Weight of All Things, Mary is less “immaculate” than she is—like all Christians—broken. And she points constantly to Jesus the Good Shepherd who appears in the novel frequently as well. — Dr. Matthew Milliner, Associate Professor of Art History

Protestants need not embrace prayer to Mary or abandon historic evangelical theology to appreciate the literary power and cultural significance of  young Nicolás’ visions. While the Catholic church continues to teach things about the Virgin that Evangelicals rightfully dispute, the Virgin Mary as she appears in this novel—broken, elusive, and pointing to Jesus—reminds us to consider how God chose Mary to participate in the birth and family life of Jesus. Mary heard and believed the word of God, and she accepted a difficult calling to become the mother of Jesus. Evangelicals might not celebrate with Catholics the Feast of the Immaculate Conception on December 8, but we can celebrate with them the Feast of the Annunciation on March 25, as Martin Luther said we should, precisely because this Feast is Scriptural. And fittingly—to return to the novel’s last page—this is when the mature Nicolás received his award. At the end of the day, the gospel is not a possession held by Catholics or Protestants, but is the true message of the lamb that holds all Christians. This gospel—well represented by the Virgin—is incompatible with the violence of guerillas or Salvadoran armies, and seem increasingly incompatible with the extreme politics of left or right in America today.

Local Notes about the Virgin Mary

For a snapshot of how students at Wheaton have explored these differences with evangelical confidence, this article describing a course taught by Dr. Milliner may help.

That course has matured into an Advanced Integrative Seminar taught by Dr. Peeler and Dr. Milliner entitled, Mary, Mother of God. Students study two millennia of Christian responses to Mary in theological texts and visual arts and then create projects that consider what should be criticized or rejected from church tradition and history.

Back to the Reading Guide
© Wheaton College