Use these resources to guide your reading and discussion of The Plague.

"From now on, it can be said that plague was the concern of all of us. . . . But once the town gates were shut, every one of us realized that all, the narrator included, were, so to speak, in the same boat, and each would have to adapt himself to the new conditions of life. Thus, for example, a feeling normally as individual as the ache of separation from those one loves suddenly became a feeling in which all shared alike and—together with fear—the greatest affliction of the long period of exile that lay ahead."

Questions for reflection and discussion

Reflection and Discussion Guide
Reading Through the Lens of Faith -- Dr. Sheri Abel

The Plague in context

Who Was Albert Camus?

Camus on the Sense and Role of the Absurd

An argument for reading Camus in the context of his craft by Dr. Richard Gibson, English

(Photo by Caio from Pexels) 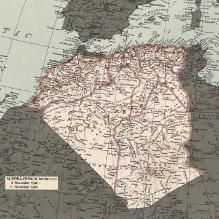 A collection of maps and photographs of key places in The Plague and in the life of Albert Camus.

"We All Have Plague," David McNutt (Core Studies) in Christianity Today

“The Myth of Sisyphus,” essay by Albert Camus

A Life Worth Living: Albert Camus and the Quest for Meaning, Robert Zaretsky

An Algerian Childhood: A Collection of Autobiographical Narratives, Leila Sebbar

“How Albert Camus’ The Plague Became the Defining Book of the Coronavirus Crisis,” Samuel Earle

“The Augustinianism of Albert Camus’ The Plague,” Gene Fendt

God and the Pandemic: A Christian Reflection on the Coronavirus and its Aftermath, NT Wright

“Camus,” In Our Time Podcast from BBC