The Jewish Context of My Name Is Asher Lev

"The Jewish Context of My Name Is Asher Lev"

My Name Is Asher Lev addresses themes that can be meaningful for a wide spectrum of readers and explores these ideas through the story of an artist whose world is patterned closely on the historical realities of Jews in mid-twentieth century America. Potok's novel has much to say about the American Jewish experience. Some background on the Jewish context helps the reader appreciate what My Name Is Asher Lev says broadly about human experience.

By 1800, the United States was home to many Jewish communities. Jews continued coming to America throughout the nineteenth century. In the mid-1800's, a large number of German-speaking Jews relocated to the United States to escape hostile environments in their home lands. In the 1880's, the persecution of Jews in the Russian Empire, Poland, Lithuania, and nearby regions led to another major influx of Jews to the United States. Between 1880 and 1925, roughly two million Jews came to America from these countries. Most brought with them not only Hebrew and Aramaic (the languages of the Talmud), but also the Jewish European language of Yiddish. The majority of these Jews settled in New York. Asher Lev's family in My Name Is Asher Lev belongs to an American offshoot of the persecuted Jewish community of Russia.

Religious Jews in America can be described as belonging to one of three branches. Orthodox Jews are the most traditional, adhering to Jewish law according to a strict interpretation of both written and oral Torah. Reform Jews are the most progressive, interpreting Jewish law according to liberal principles and allowing for more adaptation to the surrounding culture. Conservative Jews are more traditional than those in the Reform movement, but are more progressive than the Orthodox. In addition, there are many American Jews who do not follow a religious way of life but who warmly embrace their Jewish identity in terms of history, culture, and concern for other Jews.

Among Orthodox Jews, two distinct groups exist. The first group, Modern Orthodox Jews, engage the world intellectually and culturally to the degree possible within the limits of Jewish law as interpreted through a traditional lens. The other group, Haredi Jews (those who "tremble" at God), who are sometimes called "ultra-Orthodox," resist participation in the surrounding culture and live mostly segregated lives. Asher Lev's family belongs to a subcategory of the ultra-Orthodox known as Hasidic Jews.

The Hasidic ("pious") movement arose in the eighteenth century in eastern Europe. Hasidic Jews emphasize the active presence of God, spiritual and moral vibrancy, and joyous worship. The majority of Hasidic Jews live in Israel and New York. They typically dress in a manner inspired by eighteenth century Eastern European clothing (e.g., a long black coat and hat for men), and men often wear a beard and side curls. Hasidic communities are led by a spiritual leader known as a Rebbe ("great one" or "teacher"), whose authority is often passed down from father to son. There are different groups or "courts" of Hasidic Jews. In My Name Is Asher Lev, the Lev family belongs to a fictional group called Ladover Hasidim, named for the Russian town of Ladov where the community originated. In its active engagement with the broader Jewish world, Potok's fictional Ladover community is reminiscent of the real-life Chabad Lubavitch Hasidic movement, whose headquarters is in Crown Heights, Brooklyn, where Potok places the Ladover Hasidim.

In reading My Name Is Asher Lev, it is helpful to consider what the characters say and do in the context of what they value, what problems confront them, and what options are available. A good author (such as Chaim Potok) will present this to the reader, and the best way to discover the relevant context is to read the text closely. For Christian readers, it is important not to miss the distinctive elements of the Jewish context.

A few examples will illustrate this point.

First, the artistic heritage of western civilization is closely entwined with Christianity. European Jews experienced severe persecution at the hands of Christians. The hardships faced by Jews in Russia stand at the forefront of My Name Is Asher Lev. But the whole tradition of Christian hostility toward Jews (including the Holocaust) is relevant for understanding the outlook of Jews in the novel who disapprove of Asher Lev's Brooklyn Crucifixion. Whereas many American Christians today would not recognize those who persecute Jews as truly Christian, Jews are often not in a position to make such a distinction. The crucifix has been a symbol of western Christendom, and therefore belongs to a world that is dangerous for Jews. In this context, the need for Jewish leaders to keep the community together and safe is deeply felt.

Second, because of Christianity's influence on American culture, assimilation into American life is easier for practicing Christians than for Jews. In the world of Asher Lev, school events for kids would be held on Saturday, not Sunday, so that Christian kids can go to church. Business establishments would close on Christmas, so that Christians can observe their holy day. Christian students could go to secular art schools and paint crucifixes, since this form belongs to the visual vocabulary of western art. For Jews, Saturday was the Sabbath, people were expected to work on Jewish holidays, and the idioms of the surrounding culture were Christian and Greco-Roman. In this context, what it means for a religious person to navigate the surrounding culture is more complex for a Jew than it is for a Christian.

Finally, Jewish identity normally includes not only Judaism as a religion, but also identification with the Jewish people. The dimension of Judaism as a peoplehood must be kept in mind as one reads My Name Is Asher Lev. The tensions faced by Asher Lev are not primarily about apostasy from a religious creed. They challenge his understanding of how he should relate to the Jewish people as a whole, and his own Jewish community in particular. Near the beginning of the novel, Asher Lev says, "I am an observant Jew." Near the end of the book, he states, "I woke in the morning and prayed." One might conclude with satisfaction that he succeeded in keeping his "faith" and also pursuing his artistic gift. This might be one avenue to explore.

But beyond this, Christian readers will benefit from paying attention to how Asher Lev must navigate boundaries that include art, religion, family, peoplehood, and community responsibility within his specific Jewish context. 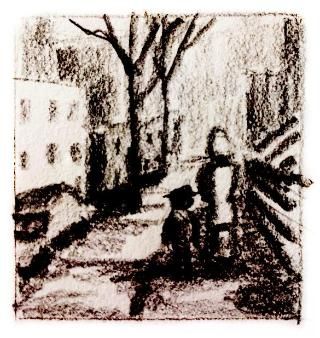