The "Stepping into Silence" Exhibit grows out of Shusaku Endo’s powerful novel, Silence, which is the Core Book for 2016-2017 and featured in Wheaton’s Christ at the Core Fall Series. 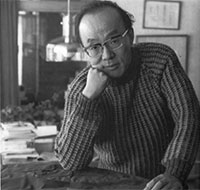 Shusaku Endo (1923-1996) was one of the most influential Japanese authors of the 20th century. His major novels address issues of faith in a global context, exploring the tension between Western and Eastern religious mentalities from the unique perspective of a Japanese Catholic.

What led Endo to Christianity was his lifelong sense of being an outsider. Endo grew up as a foreigner in Manchuria under Japanese control. At his mother’s insistence, Endo was baptized when he was twelve, but later, he would compare his experience to being forced to put on “ill-fitting Western clothes” which he’d tried and failed to take off many times.

Following his parents’ divorce, Endo returned to wartime Japan, where Christians were oppressed for believing in the enemy’s religion. Endo struggled to live a double life, being a Japanese citizen and a Catholic. In the early 1950s, he studied French Literature at the University of Lyon as one of the first Japanese exchange students. In post-war Europe, he found himself the target of racial abuse, even from his fellow Christians. While overseas, he contracted tuberculosis, and he was forced to return to Japan.

Jesus as “the Suffering Servant,” intimately acquainted with rejection, became central to his faith. Endo describes a Japanese mentality as being more “responsive to one who ‘suffers with us’ and who ‘allows for our weakness’,” and his work emphasizes “the kind-hearted maternal aspect of God revealed to us in the personality of Jesus.”

During a hospital stay for chronic tuberculosis, Endo immersed himself in reading books about the period of Christian persecution in Japan. The night before his third, highly risky operation, Endo had the chance to see a paper fumi-e (most likely the one featured in this exhibition). Later, at a small museum in Nagasaki, Endo came across a metal fumi-e, worn black by the footprints of countless apostates, which became his original inspiration for Silence.

Silence received the prestigious Tanizaki Jun’ichiro Prize in 1966. While it stirred controversy among Japanese Catholic communities, it has been translated into more than a dozen languages, garnering high praise from the likes of Graham Greene and John Updike. Silence continues to challenge readers and critics worldwide by inquiring into whether God speaks even through traumatized, failed lives.