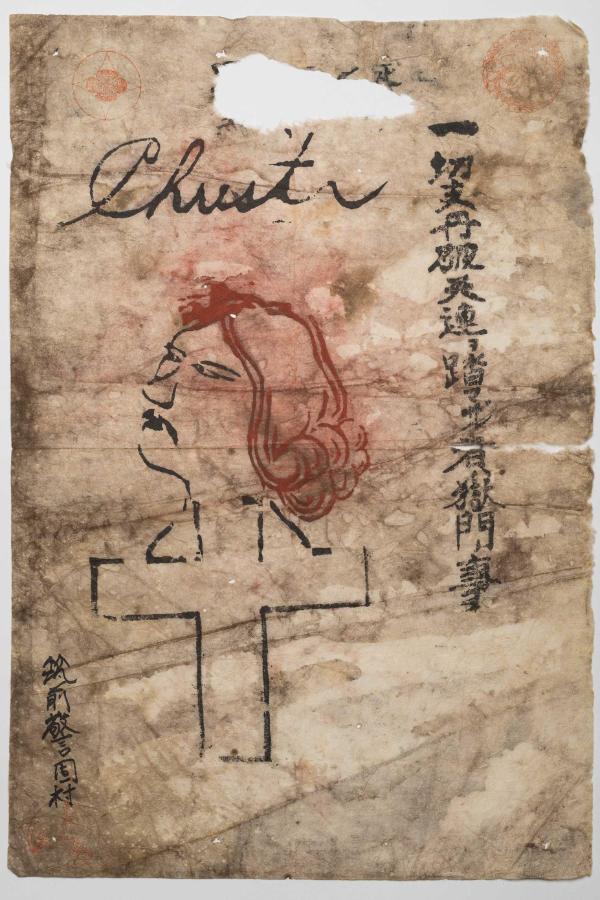 Courtesy of Brian and Sally Oxley

Paper with woodcuts and stamps in red and black ink

“Father! Father!” The entreating voice continued like that of a child pleading with its mother.

“Won’t you listen to me, father! I’ve kept deceiving you. Since you rebuked me, I began to hate you and all the Christians. Yes, it is true that I trod on the holy image.

Mokichi and Ichizo were strong. I can’t be strong like them.”

The guards, unable to bear it any longer, came out with sticks; and Kichijiro fled away, screaming as he ran.

“But I have my cause to plead! One who has trod on the sacred image has his say too. Do you think I trampled on it willingly? My feet ached with the pain. God asks me to imitate the strong, even though he made me weak. Isn’t this unreasonable?”

“Father, listen to me. I have done something for which I can never make amends. And you officials! I am a Christian. Put me in prison.”

The priest closed his eyes and began to recite the Credo. He felt a sense of joy in being able to abandon this whimpering fellow in the rain. Even though Christ prayed, Judas had hanged himself in the field of blood--and had Christ prayed for Judas? There was nothing about that in the Scriptures; and even if there was, he could not put himself into such a frame of mind as to be able to do likewise.

This extremely rare paper version of a fumi-e seems far different than the images of Stations of the Cross pictured earlier--here Christ is a fierce deity composed of his cross, who turns his face away. Yet perhaps the image is still meant to evoke (and resist ) Westernness. Endo’s A Life of Jesus emphasizes that Japanese people are more “responsive to one who ‘suffers with us’ and who ‘allows for our weakness’,” and his work evokes “the kind-hearted maternal aspect of God revealed to us in the personality of Jesus.” The Christ of this fumi-e seems less to respond than to reject the one who would trample on him.

The version of Christ we see early on in Silence through Rodrigues’ interpretation is glorious and heroic, strong and beautiful—”a face filled,” he writes his fellow priests back in Portugal, “with vigor and strength.” But the caring aspect of Christ, that he is one who encourages his disciples to “feed my lambs,” seems lost on Rodrigues in this scene with Kichijiro. The weakness of Kichijiro only offends him.