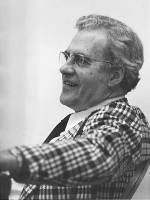 Following his service in the U.S. Navy, John Gration attended Moody Bible Institute in Chicago, where he met and married Dorothy Harpel. After earning a bachelor’s degree in Bible and philosophy at Gordon College, he moved toward fulfilling a childhood dream of becoming a missionary to Africa. The couple applied to serve with Africa Inland Mission (AIM) and was accepted. In preparation for the mission field, Dr. Gration attended the Wheaton College Graduate School, receiving a master’s degree in theology in 1952. That same year he was ordained by his home church in Ridgewood, New Jersey, completing a short pastorate before leaving for Africa.

The Grations served as missionaries to Africa for fifteen years—twelve in Zaire and three in Kenya. Upon their return in the States, he assumed the position of associate home director of AIM. He received a Ph.D. from New York University in 1974 and also studied at Princeton Theological Seminary. Widely respected as a missiologist, he was recruited by Wheaton to expand its graduate missions program in 1975. Dr. Gration committed to join the College’s faculty for one year; 20 years later, he retired.

While teaching at Wheaton he was instrumental in creating cross-cultural programs across campus, including: ethno-musicology courses, Human Needs and Global Resources (HNGR), and the TESOL certification program.

“He was a careful thinker who never forgot that mission ultimately involves action in both speaking and doing,” said the Academic Dean of Wheaton College Graduate School, Dr. Scott Moreau. “The original curriculum he developed for our degree still serves as the anchor for our current curriculum and speaks of his wisdom and ability to get at the heart of God's mission for the Church.”

In 1994, Dr. Gration received Wheaton College’s Distinguished Service to Alma Mater Award, in recognition of his devotion to the College and its students. “I find nothing more exciting,” Dr. Gration said, “than helping people unpack their dreams. It goes back to my days in the Navy, which were very formative in terms of what it means to pour your life into someone else’s life.”

Dr. Gration is survived by his wife, Dorothy; his son, Scott (Judy); his daughters Barbara (Scott) and Judy (George); and 11 grandchildren, many of whom continue his legacy in cross-cultural service.