History of the Astronomical Observatory 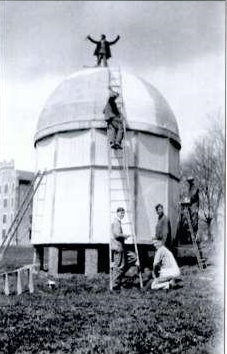 Thanks to the effort of Herman A. Fischer, Sr. the first observatory at Wheaton College was acquired for roughly $2,000 from L. F. Culver in October of 1890. With the 800 pound telescope, the 16-foot dome was carried from Harvey, Illinois by two teams of horses. Officially the Alumni Observatory, due to financial support from alums, it was commonly known as the "Lemon," thanks to its peculiar shape and bright color. The Lemon was eventually replaced in 1972 and it was sold to Honey Rock for $525.

The successor of this first observatory and cause for the removal of the Lemon was built that same year on the roof of Armerding Hall, where it housed a 12-inch telescope and a custom 8-inch Newtonian reflector telescope, which was given to the college by H.S. Miller of Naperville.

This observatory was operational until the new  Meyer Science Center was opened. In 2012 a new telescope was installed in the new observatory on top of this building.

Source: Wheaton History A to Z >>