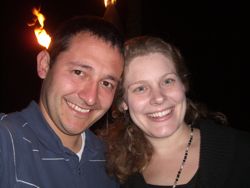 I originally chose to study German at Wheaton College because I spent a year in Germany as a high school exchange student. I wanted to make sure I continued to use and improve my German language skills. I graduated from Wheaton with a double major in German and Anthropology.

While at Wheaton, I did a study abroad semester at the Humboldt University in Berlin which included a valuable internship at a Maedchennotdienst in Berlin. When interviewing for jobs, prospective employers always wanted to know why I speak German. The internship experience in Germany also added a valuable work experience to my resume. I still have a lot of contact with my host family in Germany. They visit me frequently and I visit them as often as I can as well.

After Wheaton, I went to Loyola University Chicago and got a Master of Social Work degree. Although I am not directly using my German or Anthropology degrees, I believe they have helped me professionally and in every other way.

I am currently working as a School Social Worker at Geneva Middle School North in Geneva, IL. Danny and I now have two girls (one is 16 months and one is 2 weeks old) and I hope that they will also learn German when they get a little older. My host brother is already talking about a summer exchange for our children where his kids will stay with us for part of the summer and ours will stay with them.

It is great to know another language. My husband and his family are Spanish speaking and although my Spanish is not as good as my German, I think the German background is helping me learn another language.

Up until a short while ago, I worked at Die Arche e.V., Tecklenburg, Germany (a member community of "Arche Deutschland" and "L'Arche International"); I provided direct care to developmentally disabled adults in a residential community. I just moved back to Chicago and am starting work at L’Arche Chicago, continuing the work I started in Germany. In the fall of this year I will be starting a Master’s of Social Work program at the University of Illinois at Chicago.

In the summer of 2003, after my junior year at Wheaton, I was an intern at the Kontakt- und Beratungsstelle, Berlin, Germany, where I provided primary needs (housing for the night, food, water, basic medical supplies, and information about other social services) to teenagers and young adults living on the street.

German has been my professional and personal language over the last two years, and I've seen myself adjust well to living in Germany, in no small part because of my knowledge and understanding of the culture, history, political structure, and literature (I've read way more German literature and seen way more GOOD German films than the average German).

Originally, I decided to study German because of Dr. Shaffer. I got to know him during Wheaton in Germany 2001 and was impressed by his interest in the students, his nonrepayable investment in us students, his knowledge of (and enthusiasm for) the subjects, his teaching ability, his work ethic, his humor, his friendliness, his provocative and open thinking in the classroom, and his faithfulness to the Lord, Jesus Christ. They say to take professors and not classes, and nowhere does that hold more true than during my four years in, and outside, the classroom with Dr. Shaffer (though the classes are more than worth it in and of themselves). He belongs to the short list of people who shaped my life. 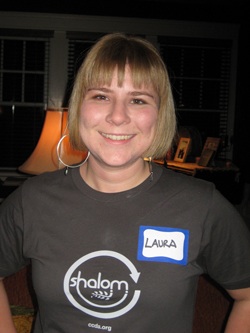 Since graduating from Wheaton, I’ve worked for a company that develops and builds affordable housing throughout the Chicago-area. As the Development Coordinator, I have had the opportunity to participate in projects ranging from mixed-income developments created as a part of the Chicago Housing Authority’s plan for public housing redevelopment, to projects involving the integration of large-scale retail and low-income housing.

I’m currently applying to graduate programs in Urban Planning and Design, and hope to move into a position where I am guiding and shaping projects from start to finish.

During my junior year at Wheaton, I took a semester off to participate in Youth With A Mission in Hurlach, Germany. I spent three months living in a castle in southern Germany, and really, it doesn’t get much better than that.

I don’t have too many opportunities to use my German language skills, especially since my job is in an unrelated field. However, I still keep in touch with several good friends from Germany, and our mutual understanding of each other’s language and culture has certainly helped us develop closer relationships. German was always a bit of a struggle for me, but these friends, who influenced me so deeply, have given me a real affection for the language. I periodically pick up a copy of Der Spiegel, or a German book to help me maintain my language skills.

Studying German was actually a requirement in my elementary and high schools. At Wheaton, I kept taking another German class each semester, and then I just ended up with the major. I’m really glad that I stayed connected to the German department throughout my time at Wheaton – the professors went above and beyond to encourage, engage, and support me.