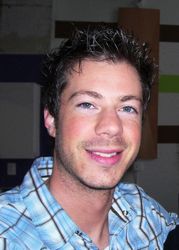 Hello. My name is Todd and I graduated in 2002 from Wheaton with a German major and a Chemistry minor. I decided to major in German because I wanted to explore foreign cultures as well as continue building on the German knowledge I already had.

One month after graduating from Wheaton I worked for nine weeks as an intern for HPP, Harnischeger, Pietsch & Partner GmbH, in Frankfurt am Main, Germany. I quickly realized how my German degree from Wheaton had adequately prepared me to take on this internship and daily activities in Germany. Dr. Shaffer’s “German only” rule during Wheaton in Germany 2001, while aggravating at times, certainly paid off in the real world.

During the internship at HPP, I applied for and received a full time position as a check-in agent for Lufthansa airlines. In October 2002 I “officially” moved to Germany and started with Lufthansa at the Frankfurt airport. Again, the education I received at Wheaton, especially related to my field in German, prepared me to interview for and take on this job as well as function as a normal citizen in Germany. Many Germans complimented my knowledge of the language, history and culture. I would tell them of my studies at Wheaton and how it prepared me to live and work in Germany.

After a year and a half I felt God calling me to the mission field in Israel and, in preparation, I began to study modern and Biblical Hebrew at the Goethe Universität in Frankfurt. After a year of Hebrew study I moved from Germany to Israel and was a full time missionary for three years. You might not think that one could use German in Israel but I did… almost every day! I volunteered for an organization that hosted outreaches for believers from around the world. About forty percent of those participating in the outreaches were German speakers. Also, the director’s wife was from Germany and it was often the language of choice between us. Besides that, many older Jewish people know some Yiddish, which is related to German, and thus allowed us to communicate.

In November 2008 I moved back to America and am currently working part time as a personal trainer and volunteering in ministry outreaches. I am not sure if my future will include using my German skills, but I’m thankful that I’ve been able to put them to good use thus far. 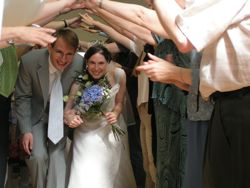 My name is Amy and my studies at Wheaton included a major in English and a minor in German.

For the past seven years I have been living in Russia, serving with a linguistics and translation organization. In 2007 I married Aleksei, who is Russian but was born in East Germany.

In high school I chose to study German because my family’s heritage is in the Schwarzwald. When I entered Wheaton I declared math as my major, but in time switched to English literature (quite a change!). Though I wasn’t sure which major to have, I was always certain I wanted a German minor. I couldn’t imagine quitting my German studies.

During my years at Wheaton, God lead me through some amazing turns in my life’s journey and opened doors I hadn’t known existed. One of these new doors was the field of linguistics (part of the required courses for all foreign language minors was a course in Applied Linguistics). Linguistics is like math with words – a combination of my varied interests. I fell in love with linguistics and spent many a Friday night blissfully decoding the puzzles of languages!

For the first four years after graduating from Wheaton, I worked on a bilingual dictionary for a Central Asian Turkic-related language. The past two years I have been coordinating and teaching a 3-month cross-cultural living orientation for translation workers newly arrived in Eurasia. I get to share with them the all the wonderful history and culture of Russia, walk them through intensive Russian language learning, and introduce them to the over 150 non-Slavic people groups in the CIS who have their own unique languages, histories, cultures, and values.

As geographic location is becoming less of a barrier in our age of globalization, many optimistically assume that culture and language barriers are disappearing as well. But in fact we are bumping into the invisible barrier of culture all the more as our cross-cultural interaction increases. Culture is much more than just outward customs such as do you greet someone with a handshake, a hug, or a bow – it is deeply rooted values and a lens that tints how we perceive all of life. These values are difficult to articulate and recognize – much like a fish cannot see the water it swims in. We may have instant virtual communication with people from every corner of the globe, but it takes time and patience to truly connect with someone’s culture. Life-changing, trust-filled relationships still require listening, an openness that your way of doing things is not the only way, and a desire to learn. Language and culture are intrinsically connected. The Russians even have a saying that the number of languages someone has learned is the number of times they have become a new person.

Putting in time and effort to learn someone else’s language and culture rather than expect that they should learn your language and culture shows respect and builds trust. This applies to both the business world and to missions work. I encourage you to pursue language and culture learning – whether German or another language. Along the road to understanding people from another culture, you will discover more about the world we live in, yourself, and even experience God in new ways.