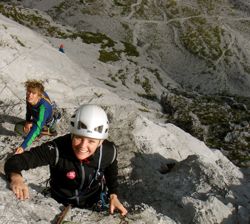 After graduating from Wheaton with a German major, I enrolled in the German Studies Master's program at Middlebury College. I spent 3 semesters (one at the Middlebury Campus, two in Mainz, Germany) fine tuning my language skills, but more importantly gaining a deeper, richer understanding of German culture. In short, it was only a matter of weeks before I knew this experience would not merely end with a M.A. degree.

I decided to extend my stay in Germany and worked as a freelance English teacher at Inlingua Language School and at a local climbing and ski shop.

After about 2 years of living in Germany, I was offered a job in the U.S. with Keen Footwear as a Tech Representative. With a mix of excitement and sadness, I accepted the position and left Germany. I returned to the midwest, where I am currently working on the field for Keen. I have high hopes that, in the future, my work will lead me back again to Europe. 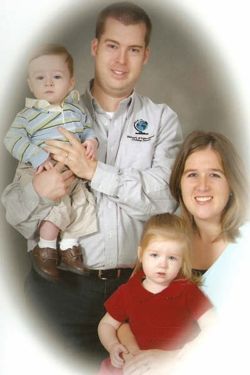 My name is Randy Lounds and I graduated in May of 2003 with a German major and Spanish minor. I completed the secondary education program at Wheaton as well.

I have been working in Uijongbu, South Korea at International Christian School since I graduated. My first three years I taught German and Spanish and I have been working as the secondary principal here at ICS ever since. I finished a Master of Science in Educational Leadership and Administration through Philadelphia Biblical University in December of 2007.

Originally I chose to study German in High School because the German teacher had the best reputation among the foreign language teachers at the school that I attended. I wanted to really learn a language, not just play around in a foreign language class for a couple years. With the help of this teacher I was able to earn an all expense paid summer trip to Germany through the AATG testing program. I considered this opportunity a gift from God and it was then that I knew that God had a plan to use the study of German in my life. I visited Germany one more time the summer before entering Wheaton knowing from the first day of college classes that I wanted German to be my major. I entered the teacher education program in my second semester with the plan to teach German in a public school. That was my focus for the majority of my studies and I added a Spanish minor to be a bit more marketable as a German/Spanish teacher. Having this combination allowed me to attend both the Wheaton in Germany and Wheaton in Spain programs, which helped to broaden my perspective of both of those cultures and allowed me to see some of the missionary work that was going on in those cultures.

My senior year I considered the possibility of teaching at an international school, having either teaching German in a Spanish speaking country or teaching Spanish in a German speaking country mostly in mind. During the second semester of my senior year the director of International Christian School - Uijongbu called me and interviewed me on the phone. He asked me how I felt about teaching German and Spanish in South Korea. I told him that I had never really though about an option like that. Over the next few weeks I felt God leading me to accept that offer and I have been working at ICS in Korea ever since.

I married Wendy in the summer of 2004 and we have two children, Abigail and Benjamin, with a third child due July, 2009. 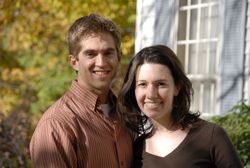 I’m Andrea. I graduated in 2006 from Wheaton with a major in Communication and a minor in German.

I started taking German classes in 7th grade because my grandma spoke German. I fell in love with the language and culture, particularly post-World War II history. I have visited Germany three times: once in high school, once with the Wheaton in Germany program, and once right after graduation when I worked with a church plant in Stuttgart. Some say the church is dying in Europe, but I saw for myself that Stuttgart has a thriving evangelical heart!

Since graduation I have been the Abstinence Education Coordinator at CareNet Pregnancy Services of DuPage. I love my job! I coordinate a youth development program, teach students, and train adults to do the same. Language and communication are pretty much what I do all day, everyday. Most of the time (okay, all of my work-related time) it has been in English. But I have run into the occasional German-speaker and I always love the chance to practice.