I graduated from Wheaton in 2006 with a double major in Business/Econ and German.

I am currently working for Chick-fil-A. CFA is a 2.2 billion dollar a year, faith-based, quick service restaurant chain. I am in a management development program to be a store Operator. The Operator of a store essentially acts as an owner, but the store still belongs to CFA, Inc. They developed this model based on the Biblical principal of stewardship. The owner is responsible for everything in the store, but CFA still owns it. The company will be expanding to the Chicago area and Northeast soon, which is where my wife Molly and I are hoping to relocate!

Prior to working at CFA, I held an internship with the German American Chamber of Commerce, South (GAAC). I began this 6-month internship immediately following graduation and was offered a staff position after the internship was over. I worked at the Chamber from July 2007 to July 2008 and assisted German companies with market-entry in the US. My role was a researcher, though my title was "Consultant." Essentially, I studied the market for any given product that the German firm was trying to introduce in the US. These products ranged from golf course aerators, to laboratory software, to tire inflation monitors for buses. I helped not only gather information for a particular industry, but I also helped match interested American firms with the German companies.

This "matchmaking" typically culminated in a business trip to the US by the German firm, which I helped organize, and sometimes I even traveled with the German company to these potential business partner meetings. The GACC served as the bridge between the Atlantic and hosted a variety of events to promote bilateral trade between the US and Germany. These events consisted of renewable energies conferences, galas, and networking events.

Wheaton College taught me valuable research skills that DIRECTLY applied to my field of work, and my German major helped me understand the cultural nuances and differences between Germany and the US. This understanding of the German culture helped me thrive at the GACC, which was essential, as I was only one of three Americans working in the 30-person business.

Business etiquette and approach to a life-work balance was beneficial to my understanding of the German business mindset (i.e. keep work at work, but work hard when you are at work). I used my understanding of "German directness," attention to detail, and thoroughness that my German major helped me to develop. This was very useful when I conversed with my German clients and colleagues.

My major in German became very useful in reading and listening, too. I had to interpret and understand contracts written in German. And I was the minority at the GACC, which meant that most of our meetings were held in German as well. All of my clients spoke English, which was helpful for me because of the technicality of some of the fields that I was researching.

The GACC was an excellent opportunity and I would recommend that a Wheaton student examine internship possibilities at the GACC Midwest. It would be an excellent resume builder. I am glad that this was my first position and I would happily speak with any students interested in learning more about the GACC.

Wheaton College helped greatly in learning how to sift through information and apply the most relevant facts to a project. I cannot believe how closely my first job tied into my Business/Econ and German double major! I must say, however, that this first job spoiled me greatly. We not only had American holidays off, but also German holidays! On top of that, 20 days of vacation a year were given along with 6 sick days! This is unheard of for an entry-level position, but I am very grateful to have "eased in" to the professional field, as I had never had a full-time job before the GACC.

I originally decided to study German because I had taken it in high school. I did not want to lose the knowledge that I had gained there. Throughout my time at Wheaton, however, I gained a deep appreciation and love of the German culture and its people through the classes that Dr. Schreiber and Dr. Shaffer taught. My time in Germany with Wheaton-in-Germany affirmed this love of the culture and people and I would highly recommend the program to any prospective minor or major. This was also a very useful conversation point when interviewing for any job which I was interested in. 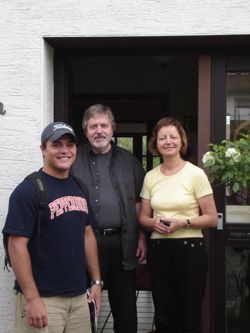 I graduated in '06 with a Business/Economics major and a German minor.

I think German really played an important part in getting my job and in my daily work. I currently work for an investment firm. Basically, we sell investment packages to financial advisors; hence, my past 12 months have been extremely stressful. Even so, my German experiences come up often in conversation, including my initial interview and daily conversations with clients. Most people are surprisingly fascinated that I a) spent time traveling in Europe as a student, and b) studied German.

I decided to continue studying German beyond the basic competency primarily because of the Wheaton in Germany program. That was easily the most exciting academic experience I had at Wheaton.

This is a picture of me with my host family in Bonn. 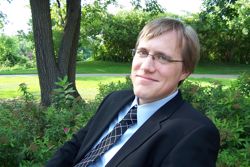 I am currently a Project Coordinator for a home automation systems firm serving the high-end residential construction industry in the Chicagoland area.

I graduated with a major in Biblical and Theological Studies and a minor in German in 2005. In 2007, I completed a M.A. from Wheaton in Historical & Systematic Theology.

I found that proficiency in the language proved to be an invaluable resource during my postgraduate studies in theology. Given that many of the most influential theological lights of the modern period were German speakers, comprehension of the German language is essential for anyone committed to serious pursuit of theological studies. In addition to being able to read primary sources in the original language, I discovered that knowledge of German opened up an entire body of secondary or untranslated sources that would otherwise have been inaccessible to me.

I decided to study German because I loved the language. I started at Wheaton with my language requirement already fulfilled by AP German in high school. However, I quickly began to miss studying German, so I decided to add it on as a minor.

Some of my most memorable classes at Wheaton College were German courses, particularly German Film and Senior Seminar. I found that engaging cultural artifacts, like films and literature, in their original language not only enhances one’s enjoyment of them. More importantly, it grants access to another culture in ways that would otherwise be hopelessly lost in translation.