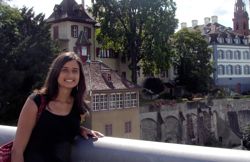 I graduated with a B.A in German from Wheaton College in May 2008. I am now an M.A. student at the University of Illinois at Chicago (Germanic Studies). This past academic year I was a Teacher Assistant, and I taught basic to intermediate courses in German for the undergraduate program at UIC. Along with teaching, I was required to take a course on the Theoretical and Research Foundations of Communicative Language Teaching. The combination of these two experiences has made me both excited about pursuing a career in teaching, as well as equipped me with the necessary tools and resources to provide an appropriate and successful classroom environment.

For this upcoming academic year (2009-2010), I have received the Max Kade Fellowship, for which I am greatly honored. I will therefore not be teaching this fall. However, my focus for this next year is to finish my Master’s Thesis and defend by next May (2010), and for this reason the fellowship has allowed me to have sufficient time to accomplish this. Praise God!

My area of research lies in all things German-Jewish, specifically in 18th- and 19th- Century German-Jewish Culture and Literature. Topics of particular interest include identity, immigration and cross-cultural boundaries. I am also generally interested in Minority Literature.

I originally majored in German at Wheaton College alongside of being pre-med, and had every intention of pursuing medical school and becoming a doctor. However, over the course of my four years at Wheaton, my interest in German culture and literature increased dramatically. In fact I found myself enjoying my German courses more so than all of my other courses, including my pre-med courses. Throughout my junior year, with much prayer and guidance, I felt led to not pursue medical school but rather graduate school. I then immediately took the GRE, applied for various grad schools across the country and had Dr. Shaffer and Dr. Schreiber fill out many recommendation forms (which I am so grateful for)! I was accepted at UIC Germanic Studies during my senior year, and now I am about to begin my 2nd year here at UIC.

Looking back on the whole process, I can see God’s hand through it all. However, I must admit that for me this has been a step by step journey, in which I have not always known where He would lead me next. I would have never seen myself here four years ago, but I know now that this is exactly where I am supposed to be, and I see God’s grace and sovereignty every single day! My encouragement to you is thus “to trust in the Lord with all your heart and lean not on your own understanding. In all you do acknowledge Him and He will direct your paths”. Realize that the LORD must be sovereign in your life and live in that reality.

I'm currently working on a Ph.D. in History at the University of Illinois. For my dissertation, I will examine fatherhood, fatherly masculinity, and Vaterlosigkeit by looking at dynamic continuities in fatherhood within their historical and literary contexts of the 19th and early 20th centuries.

After graduating from Wheaton, I completed an M.A. in German studies at Middlebury College. For this degree, I spent a semester in Vermont and then a year in Mainz, Germany. I then did an M.A. in history at Loyola University Chicago, during which time I taught German, grades 1-8, at a private school.

As an historian of modern Germany, I have found that the language skills I acquired at Wheaton (and honed while doing an M.A. in Germany) are of great value. My language skills allow me to read primary and secondary source materials without a problem. And a solid foundation in German permits one to fine tune his language skills when living, studying, or doing research in Germany.

Originally, the desire to become proficient in a foreign language was what compelled me to study German. Once immersed in German studies, however, the satisfying complexities of the language and its rich corpus of literature convinced me to pursue further, more intense study.

My name is Ted. I majored in Business Economics and did a number of upper division German courses at Wheaton. Before graduate school, I held two internships: one in investment management and the other in venture capital. Now I'm an Assistant Professor in Finance at Northern Illinois University.

I originally decided to study German because of Wheaton's foreign language requirement. I had taken some German in high school and thought it would be a good idea to continue in German. In addition, I had a few relatives who were fluent in German.

I'm not currently using my German language skills in any direct capacity. However, as a professor, my job consists of communication and even translation. I communicate through my teaching responsibilities and through writing in my research. Much of graduate school felt like being immersed in a foreign culture with a foreign language. I found myself having to learn an entirely new vocabulary and learn about the practices of professional academia. I am often translating technical jargon common to the field of finance into language that my students can understand. As such, I believe that I have benefited from studying the German language and the German culture.

The last time I was in Germany was for a stopover on the way to Turkey during my honeymoon. (Going to Germany introduced me to the Turkish culture, which played a role in choosing Turkey as a honeymoon destination.) The stopover was about a day, but I had the opportunity to speak to an airport shuttle driver and order a meal in German. My new bride was impressed with my language skills, and I was glad to be able to use my language skills back in Germany for a second time.