Pat Cate '63 has been a pastor, missionary, and teacher. 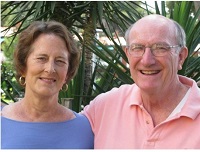 In 1963, I graduated from Wheaton, and if I had it to do over, I probably would major in history again. It is said that history is a subject without a future but I think it is very relevant today, especially in understanding our context.

I was influenced by a statement Billy Graham’s professor of anthropology wrote in a letter to Billy Graham, saying, “I don’t hear you using any quotes from anthropology in your preaching”. This inspired me not to bury my interest in history, and it has been natural to use history in my ministry.

When I attended Wheaton, I planned to go into the ministry, and by that I was thinking the pastorate. Gradually during those Wheaton years, I became open to missions. When I graduated, I took a gap year and went around the world. During that year, God called me to missions to Muslims. While studying at Joseph P. Free’s Near East School of Archaeology (Part of Wheaton’s grad school at the time), God sealed the call.

Next came 4 years of studying at Dallas Theological Seminary with a mission major that required at least six semesters of church history. Then came a Ph.D. in History of Religions – Islamics at Hartford Seminary. History of Religions does not mean studying the history of religions but to use a historical method, trying not to be biased in our reading. However, I did concentrate on the history of Christian/Muslim relations, trying to learn lessons for today from the thirteen centuries of theological interactions.

During those Hartford years, we planted and pastored a New England country church. There I first took my family, and later the youth of the church, on a New England missions and church history tour. Over the years we have taken tours from our three supporting Connecticut churches to: Jonathan Edward’s birth and conversion place and the graves of his parents and sisters – all in South Windsor, Enfield, where he preached “Sinners in the Hands of an Angry God”; Edward’s Northampton church where the Great Awakening emerged; the graves of his daughter and her fiancé, David Brainerd; then Northfield, MA for the birthplace and grave of Dwight L. Moody and his conference ground where the Student Volunteer Movement began, which sent out 20,000 missionaries. Next is Williams College, for the location of the Haystack prayer meeting producing the first foreign mission team from the U.S. Then comes Stockbridge for the spot of Edward’s church where he was a missionary to Indians and where he wrote his theology. Finally we visit the grave of Henry Obookiah in Cornwall, the first Hawaiian believer whose death began U.S. missions to the Pacific. It is also the location of the first U.S. school for training missionaries which included nationals from the Pacific.

We served in Kermanshah, Iran for four years, living very near the Behistun inscription (the Rosetta stone for ancient Farsi) that I had studied about in ancient history at Wheaton. Our favorite place was Shush, where all of Esther, significant parts of Nehemiah, Ezra, and Daniel took place. As a family, we acted out Esther in the palace ruins where it probably took place. Iran also has the ruins of Persepolis, Darius’s palace city, Cyrus’s grave, and significant Muslim sites.

In Egypt, where we lived five years, we first took our family and then our team to climb Mt. Sinai. We were privileged to see and take our team to Zoan, where as far as we know could be the spot Moses talked with Pharaoh (Psalm 78) and also to Kadesh Barnea where the 12 spies entered from and returned to. (You have to know Arabic to get to these places. They are not on tourist maps.) Egypt is full of Pharaonic, Christian and Muslim ruins. Over our five years we visited most of them. Annually we took my Friday school class to the graves of Borden of Yale, Oswald Chambers and Temple Gairdner.

Then during our Reading, PA, days we had Dr. Earle Cairns, chair of the History Department during my Wheaton days, lead our missionaries on a tour to the Moravian headquarters under Count Van Zinzendorf in Bethlehem and Nazareth which was a headquarters for both the Moravians and Whitefield. On the same day we went to Princeton and saw the grave of Jonathan Edwards.

Some of our kids and grandkids live in Andover, MA, so three blocks from their home we regularly visit “missionary woods” and the marker showing where the first missionary team prayed as they prepared to bring the gospel to Asia.

Now living in North Carolina, we have visited the country church that was the mother church for the Southern Baptists. The founder had been a Congregationalist and came out of the great awakening in Connecticut. We also have visited two locations here for the sesquicentennial anniversary of the Civil War. The largest surrender of Confederate troops at Bennett Place is a few miles away from where we live in Durham.

I taught Muslim evangelism in a lot of countries and schools, including five years teaching in Barcelona, Spain. Since the Muslims ruled part or all of Spain from 711 to 1492 there are about 4000 words and idioms in Spanish from Arabic and many cultural values as well. I try to spell this out when I teach Spanish speakers in whatever country I am teaching.

In teaching the Bible, the history and geography of the text is obviously important to help unpack what God is saying. During our pastorate in Connecticut we made sure that a history of our church was written and when I was vice-president and later president of our mission, Christar, I made sure that our history was written. A Wheaton grad, Margaret Chamberlin, wrote one of those histories.

In each of these places we have tried to learn practical lessons from their histories for our walk with Christ. As you can see most of my continued interest in history is not so much related to facts I learned at Wheaton as it is an attitude of appreciating the history and the historical context of where we lived and what God is doing in past and present history.

For instance, I put the real end of colonialism with Khomeini’s return to Iran in 1979 (when the U.S. had to flee Iran). That was the beginning of Muslim fundamentalism’s revolutions around the world. But today we thank God for Khomeini because the number of Iranian Muslim background believers in Christ in Iran and outside the country has boomed exponentially from about 300 in 1979 to about 500,000 today. Our prayer is that God will do the same through ISIS, al Qaida, Boko Haram, and al Shabab. It appears that God is answering the prayer of many for this.

History is a great major especially if you are going to grad school because it is so broad and grad school is usually specialized. My only suggestions for a history major would be to not just memorize facts of history but to think of the big picture and trends and the movement of God in history and then to try to learn from it and apply it wherever you live.