Writer and Editor at Pearson Education and Madras Press 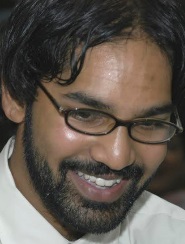 Majoring in English with a Writing Concentration at Wheaton gave Sumanth Prabhaker ‘04 the experience he needed to write everything from textbooks to fiction. Writer and editor at Pearson Education, Sumanth is also the founding editor of Madras Press, a publishing company that produces short fiction and novellas, distributing the proceeds to non-profit organizations.

After graduating from Wheaton, Prabhaker attended the University of North Carolina Wilmington MFA program, earning his masters in Creative Writing.

“Because I'd worked with the newspaper and the literary journal at Wheaton, I was given a half-time position in the university's press to help fund my tuition,” said Prabhaker, who worked as an Editorial Assistant at UNCW’s newspaper.

Prabhaker then accepted a job as Production Editor with Pearson Education, a textbook publisher and educational conglomerate. He has authored several short stories as well as the novella A Mere Pittance.  Six years ago, he began Madras Press.

“Even though that hasn't been a source of income, it's the thing that I put the most into,” said Prabhaker. “So many writers start out wanting to publish a book that lots of people will read and love, which is obviously the worst way to become a better writer, because you end up shaping your thoughts in response to these made-up hordes of fans. I was fortunate enough to have teachers [at Wheaton] who assessed my work based not purely on the 'quality' of the writing but more on its effectiveness as a form of communication, which helped me realize why the prettiest book will always seem dead to you if it doesn't value the things you value, which I guess has connotations for life outside of college.”

Prabhaker studied with several English professors over the course of multiple terms at Wheaton.

“Their offices were the safest and most important places on campus for me,” shares Prabhaker. “Without their support and wisdom and overall good-heartedness, I would have left college entirely, so I always will have them to thank for whatever success I might eventually enjoy.”

As to advice for Wheaton English students, Prabhaker notes, “There are some really great bookstores in Chicago: go to Quimby's! And Myopic Books and Women & Children First! Find an internship with Another Chicago Magazine or Featherproof Books. Hang out at The Poetry Foundation, if that's your thing. There are so many great, expansive opportunities in the city that can really widen the context of what you learn at school and show you the actual lasting value of studying English.”