She teaches English at Valparaiso University - and writes. 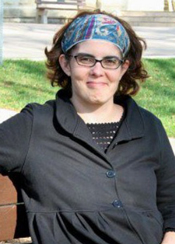 Bring us up to speed about what keeps you busy these days. What recent accomplishments would you like to share?

I’m currently teaching English at Valparaiso University and editing poetry for The Cresset and for WordFarm Press. For WordFarm I recently edited Jeanne Murray Walker’s New and Selected Poems (she was also a Wheaton grad!). My first book of poetry, titled The Eyes the Window, came out in November. I’ve been publishing poems in lots of journals as well, including recently Books & Culture, Hobart, The Collagist, Ruminate, Redivider, and The Christian Century. Also, I just got back from teaching at the New England Young Writers Conference at Breadloaf in Vermont, which is where Robert Frost had his writing cabin.

Was there a specific class or a professor at Wheaton that challenged you to widen your academic perspective? Why did you decide to become a professor?

I think the whole English program at Wheaton challenged me and broadened me academically, though I specifically remember Roger Lundin’s American Literature class as the one that brought me back to the major (I had started out in English, but changed to Sociology my freshman year.) He brought in superb historical and cultural context to the literature we studied. Then I went on Wheaton in England the summer after my senior year. It was an amazingly intense literary experience which solidified for me that I wanted literature to be a permanent part of my life. Lundin’s Modern British class, which I took in England, sticks in my mind because that’s where I first got to know T.S. Eliotwell. Eliot was the first major literary influence on me as a writer. In fact, I don’t believe I had any interest in being a poet until I encountered Eliot. (I had actually wanted to write science fiction novels before then!) I also remember receiving a lot of support and encouragement from former professor Kent Gramm, whose creative writing classes I took.

If you could wave a magic wand and transport yourself back to any good memory from your time at Wheaton, which moment would you choose?

Definitely Wheaton in England! The summer I went we all really solidified as a group. I loved the classes (with Lee Ryken as well as Lundin) and the people and seeing all the wonderful literary sites around England--Dove Cottage especially sticks in my mind, and seeing Les Misérables in London from nosebleed seats. I remember in the evenings we students did something we called “Postmodern Poetry” where we sat around and took turns spouting off lines of poetry, sort of like poetry improv. I wrote more poetry there than I ever had before and found the landscapes inspiring.

How does your Wheaton experience continue to affect your life and career?

I think the rigorous academics at Wheaton gave me a strong foundation to continue on with my schooling and now with my own teaching. And even though I don’t teach theology, my MA in theology from Wheaton helped me get my current job and has given me a great background for my writing and

Your first poetry collection, The Eyes the Window, won the Powder Horn Prize last year. What can you tell us about the inspiration and intent of the collection as well as the experience of being published and recognized through the award?

I wrote a book for my MFA program, then threw out the whole thing after I graduated and spent about two years writing The Eyes the Window. I wrote the book while I was reading a lot of theoretical physics, so there are a lot of poems in the collection inspired by that. The collection considers especially the idea that each person views and experiences the world in a completely different and unique manner.

So how does that affect the way we navigate the world and especially the way we connect with other people?

The Eyes the Window won the last contest that I submitted to. I had submitted to so many contests over a period of years that I had become pretty discouraged and had decided to quit trying with that book and focus on new writing. Then I won! It was thrilling and especially exciting once I actually held the book in my hands. But the weird thing about being published is that it’s never as satisfying as you think it will be because there’s always something more you want to write. So by the time this book came out, I’d already finished writing my second book and now I’m hoping to find a publisher for that.

Can you tell us anything about the next poetry collection you’re working on?

Yes, my next collection is called Basic Disaster Supplies Kit. Nearly every poem in that book was inspired by and responds to other “texts” – and I use that term loosely. Sometimes the texts are other books that I’ve read, poems that I’ve encountered, but often the texts are photographs, pieces of art, and especially weird things I found on the Internet. In this book I really wanted to embrace the concept that poetry can be inspired by and respond to anything out in the world. Anything at all!

What advice would you give to an aspiring poet?

The best advice I’ve encountered, which I’ve heard from a variety of successful writers, is to never give up. Writers receive a lot of rejection, and especially when you’re young this rejection feels very personal because poems are very close to your heart. But you have to learn to put the rejections aside and keep trying. I have a policy now of immediately sending poems out to another journal once I get a rejection, and I try not to take it personally.

It’s so important to find a group of friends who are also writers. You need that support and encouragement and the understanding of other people who are like you. In fact, I’m writing my answers to these questions right now on a retreat in Indiana with a group of close friends who are also people of faith and poets. I wouldn’t be where I am today as a writer without these people.