Joshua Moreno '16 delivered the following speech at the English department chapel in the spring of 2016. Moreno recently graduated with an English Writing major and a minor in Communication. He has been involved on campus with Unidad Cristiana, the Student Alumni Board, the general education committee for the diversity curriculum, and the advancement office (the Discovery Initiative), where he interviewed alumni. He received a third place prize in poetry in the Lowell-Grabill contest. He will soon be working as a paralegal at Mintel. 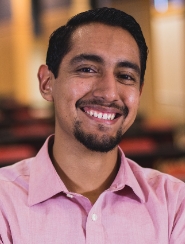 Growing up my first language was conglomeration: a mixture of Spanish and English. My parents are from Mexico, and while they came in their teenage years to the United States their dominant intimate language is Spanish. My grandmother, who took care of me as a kid, only spoke Spanish. Our communication was discombobulated, me being an American-born Mexican in an English school system. But hey, look at me now momma: I’m majoring in English. Writing. My family is probably confused as to what I did the past 12 years of my education other than write in English, but it’s more than that! Like everyone here, I started off as a business major. You know, the job friendly, practical major that dad said would make that paper. No, me, instead I write papers.

I write papers titled “Saving Salvation: An Examination of James Baldwin’s Go Tell It on the Mountain” or “Being Brown in a Black and White World” (for Creative Writing) or my personal favorite, “Spiritual Erectile Dysfunction” for Dr. Bieber Lake’s Post Modern Literature course.  Great class.

So why, why study English? For me, for my family, for the characters I create—it meant finding voice and creating connections.

Coming to Wheaton was similar to the discombobulated misunderstanding spoken in my home. It was a different experience: I had never heard of C.S. Lewis, and Wheaton was an entirely new world, something I had difficulty relating to, but when I began to consider English as a major I took Dr. Coolidge’s Classical and Early British Literature course. Here I found someone to relate to in the randomest of places: The Odyssey.

There’s a scene where Athena essentially is telling Telemachus, “Calm down. I got this. Me, a god, is on your side and handling the situation.” And Homer writes: “But his heart was filled with sadness when he found the suitors still within his house, where in the courtyard they were skinning goats and roasting hogs.” In the margins of my text I wrote: “MMM, I FEEL YOU. LORD PROMISES, YET STILL STUFF LOOKS THE SAME.”

Here, I was relating to some Greek mythological man almost weeping because I entered into that experience of young Telemachus.  Telemachus connected me to the story, the narrative.

And when I write, I think of whom I want to connect to my characters and why, what experiences I want people to enter into. And voice: their voice is essential in doing that. So I write poetry about La Rosita on North Avenue, the Hispanic grocery store with walls that have the guts of a rainbow plastered on them, green, pink, blue. I write about “uneducated immigrants” being more wise and resourceful than middle class professors—obviously not Wheaton ones, though.  I write about the homeless lady on Washington who sits in a wheelchair, smiling, with a sign that says “God bless.” The development of my writing, learning about voice, inevitably helped shape on own voice, on this campus and in life in general. Writing allowed me better understand my own experience and gave me the tools to allow others to enter into it too.