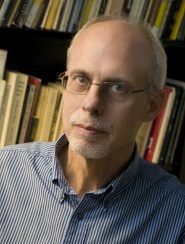 In Fall 2015, writer and professor Tom Gardner visited the English Department as a Writer in Residence. Gardner, an Alumni Distinguished Professor of English at Virginia Tech, has published five books of literary criticism, two plays, a book of poems, and a collection of lyric essays. He has won Guggenheim, Fulbright, and National Endowment for the Arts fellowships, among other awards. During his stay at Wheaton, Gardner visited with students in their classes, gave a poetry reading, and delivered a lecture.

“I called them prose poems when I was writing them,” said Gardner of the year’s-worth of journal entries, written after his morning runs in the Jefferson National Forest. “My editor called them lyric essays, because he was nervous,” he added with a smile.

Each daily entry reflects differently on the body, poetry, and theology. The essays echo the rhythm of the run, as Gardner makes connections between the slipperiness of the trail and a cherished quote from Thoreau or Dickinson. For the reading, Gardner chose the entries that dealt with unexpected loss, personal grief, and the passage of time.

“What is this love that loves us, that comes from nowhere?” asks a character in Malick’s film To The Wonder. In the works of Malick and Robinson, Gardner identified characters whose “inner wordlessness” can only be expressed with the intersection of theology and the lyric. Lyric poetry voices our desire for a revelation which Gardner described as “visible but not yet attainable.” The lecture concluded with questions and conversation with the audience.