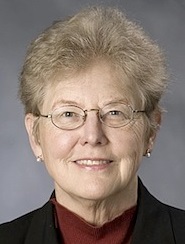 On April 27, the Wheaton College English Department reveled in the scholarship of Dr. N. Katherine Hayles of Duke University, a leading scholar in the areas of science and literature, electronic (or “born digital”) literature, and the digital humanities. Dr. Hayles is the author of eight books, the most recent being How We Think: Digital Media and Contemporary Technogenesis, a study of how our thinking has changed with the media we employ.

After joining students and Dr. Richard Gibson for lunch, Hayles led a larger group of students and professors for a seminar discussion of electronic literature. Hayles had chosen four electronic works for discussion, including a sprawling computer-generated poem that paired the language of Moby Dick and Emily Dickinson’s lyric forms, an interactive series of vignettes loosely based on the life and thought of the philosopher Ludwig Wittgenstein, and a layered reflection on the Fukushima disaster that used the familiar format of a calendar. Like all born-digital electronic literature, these pieces were designed to be experienced on a personal computer and, in turn, sparked a lively discussion amongst attendees.

In the evening, Dr. Hayles presented a lecture titled “Rethinking Cognition: Implications for the Digital Humanities.” Offering a fresh perspective on the controversy over what machine analysis can achieve in literary study, she argued that computers actually have the ability of cognition.  “Cognition is a process of interpreting information in contexts that connect it with meaning,” said Hayles, explaining how all literary interpretation is made possible through this process.

Addressing the idea that there is an “immeasurable gap” between human cognition and machine calculation, Hayles argued that the gap does not exist at all; in fact, computers exhibit a non-conscious form of cognition. Non-conscious cognition allows computers to recognize and analyze patterns, draw inferences, interpret ambiguous or conflicting information, and comprehend large corpora of literature that would overwhelm a human reader.

Like human readers, computational media perform sophisticated cognitive tasks. What might this mean for the study of the humanities and for literature in particular? “Cognition is a much broader faculty than just consciousness…We cannot say the only meanings that count are the meanings which occur in human consciousness,” Hayles contends.

Foreseeing the implications of this change in perspective, she called for a sea change towards more collaborative literary study, in which human scholars cooperate with stunningly powerful cognitive machines, and computer programmers are listed as co-authors on academic publications. Hayles concluded her lecture by answering questions from the audience about the new limits of knowledge in a digital world.