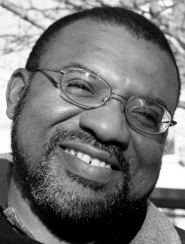 Dawes’ lecture, “Black My Story: Coming of Age in Roots Reggae Jamaica,” focused on how the music of reggae artist Bob Marley had inspired Dawes in his vocation as a poet.

“Reggae taught me how to write as a person of faith—a person willing to put faith as a part of his art,” said Dawes, who has published sixteen poetry collections in addition to plays and novels.

Though he acknowledged that he saw this quality in poets like Gerard Manley Hopkins and John Donne, Bob Marley and other reggae artists wrote into the reality in which Dawes grew up and taught him how to engage artistically with that reality. Reggae, Dawes explained, is a standard “to strive for something lasting, urgent, and ultimately necessary in the world.”

But in reggae, as in Dawes’ poetry, activism is partnered with an emphasis on artistry.

“I see a path for an artist to be at once an activist…and to be wholly an artist, concerned about craft and about the beauty and power of language,” said Dawes, as he described Marley’s influence on his own craft.

The following evening, Dawes gave a poetry reading that showcased the results of his inspiration from Marley and reggae culture. The reading focused primarily on poems from Dawes’ latest collection, Duppy Conqueror. His work explored themes of cultural and racial identity and human connection, inspired by Dawes’ life as well as the experiences of others.

Dawes closed both his lecture and poetry reading by answering questions from the audience, discussing with students both his life as a Christian and as a poet.

“He inspired me to try again exercising my capacity for empathy through writing,” said English major Charis Valmores, ‘18.

Dawes is an Emmy award recipient for his project LiveHopeLove.com and is currently Chancellor’s Professor of English at the University of Nebraska as well as the Glenna Luschei Editor of Prairie Schooner.