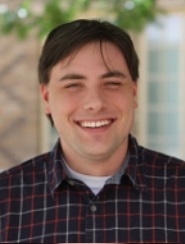 The Spring 2015 literary calendar included a poetry reading by accomplished poet, editor, and professor George David Clark. Clark’s collection Reveille is the winner of the Miller Williams Poetry Prize. He earned an M.F.A. at the University of Virginia and a PhD in English and Creative Writing at Texas Tech University. He is now a visiting Assistant Professor at Valparaiso University and the editor-in-chief of 32 Poems.

“I think of poetry readings as kind of like speed dating,” began Clark, who chose to forgo the microphone and create a less formal atmosphere with his audience in the Fireside Room. “If the poem gets boring, you can just nod your head and smile, and in a moment, a new one’s going to come along.”

Clark read a varied assortment of poems from his inventive, imagistic collection Reveille, interspersed with recitations of some of his favorite poets. Some of Clark’s poems had a concrete narrative while others were more abstract, but all shared one thing in common.

“Every poem in the book is a love poem,” Clark explained. “They’re not all love poems to people; some of them are love poems to an animal or a place.”

Clark described how Reveille began after his wife underwent surgery and was taking medication that caused her to sleep twenty hours a day.

“Days would pass, weeks would pass where I never saw my wife awake,” said Clark, who began to imagine reveilles calling a sleeper to rejoin the world with the music of various instruments. One such poem is “Reveille with Kazoo,” which he followed with “Lullaby with Bourbon” and “White Noise,” a meditation on the ambient noise that helps his three children fall asleep.

Clark concluded the reading by answering questions from the audience. Afterwards, he joined Dr. Brett Foster’s Poetry Writing and Criticism class for a post-reading discussion about revision, inspiration, and the challenges and rewards of writing in form.