Literature is changing. Do you know how?

The exhibition was free, interactive, and set up with various computer stations to encourage visitors to explore e-literature texts on their own. The crowd buzzed with lively discussion as readers moved from computer to computer. Class members acted as docents, capably fielding questions and helping visitors to navigate each work.

“This was a student-centered exercise,” said Dr. Gibson. “The members of the class together selected the works to display; they picked the room; they organized the space; they generated all the textual content for the brochure, captions, ads; and, as you saw, they were the ones responsible for presenting the material.” 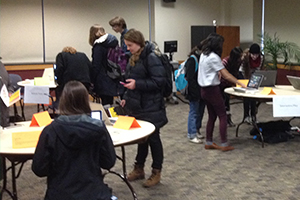 Students and faculty tested out an eclectic collection of texts spanning decades of e-literature’s history, ranging from the 1980s to 2013. Some texts were laden with image or animation, like the kinetic poem The Mandrake Vehicles, whose stanzas dissolve before the reader’s eyes and reassemble as new words. Other works allowed the reader to make decisions that directly affect the narrative, such as Lost Pig, an interactive “Choose Your Own Adventure” fiction in which the reader uses text commands to propel the story. Still other texts made use of maps and GPS, like The Silent History, a multi-author novel that offers different readings depending on the reader’s geographic location. One of the most popular exhibits was the interactive fiction The Stanley Parable, in which the player explores a labyrinthine office building while his or her actions are observed by an unseen narrator. Many students gathered to watch a playthrough of the game, collectively deciding whether to obey the nudges of the narrator or to provoke his annoyance by going in the opposite direction.

Grace Walter, one of the students who curated the exhibit, described her study of e-literature as an exploration of new terrain.

“It's completely changed how I think about the limitations of reading and of computing--they're both so much more than I originally thought,” she said. “As a class, we really have formed a community as we've talked about these works. There are a lot of perspectives involved: gamers, educators, English majors, psychologists, theologians. With the exhibit, we got to share some of that conversation with the campus community.”

Before leaving the exhibition, visitors had the chance to co-create an e-literature text of their own. As part of a communal storytelling project, contributors typed a brief personal account about a first experience at Wheaton, then pinpointed where it happened by placing a marker on an interactive map for others to read.

“The liberal arts tradition touts joint intellectual inquiry; that’s what happened here,” said Dr. Gibson of both the exhibition and the vanguard class that made it possible. “I don’t think I’ve ever learned so much with and from my students in my ten years of teaching.”