A Student's Perspective on “Enumeration: Translating between Letter and Number” 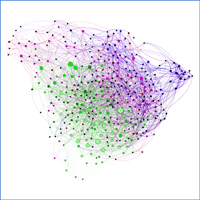 I was almost late to the Andrew Piper lecture. Huffing and puffing my way up the stairs to the third floor of Blanchard Hall, unwrapping myself from a cocoon of coat and scarves, I sat down in the third or fourth row and looked at the digital clock. 7:29 pm.

With one minute to spare before the lecture was due to begin, I had just enough time to wonder exactly what it would be about. As an English major who passed the Quantitative Skills Test (only by a margin of one point, mind you,) I was curious about how Professor Piper would integrate math and computer science into a new method of literary criticism.
Prof. Piper began his lecture, entitled “Enumeration: Translating between Letter and Number,” by introducing himself as neither a luddite nor a futurist, but rather one who appreciates what books excel at while taking advantage of digital technology to study them. I found myself drawn into his lecture, a compact spiral of the fascinating new perspectives that he has gleaned through his digitized study of literature. His subjects ranged widely, from a recitation of German Romantic poetry to a rumination on St. Augustine’s conversion and Dame Agatha Christie’s Alzheimer’s disease.

What really caught my attention, though, were Piper’s “literary topologies:” digitally created, visual maps of books that reveal over-arching patterns of influence and connectivity. Using Walt Whitman’s Leaves of Grass as an example, Piper showed how the poet’s writing style matured with each republication of the work. Leaves of Grass, explained Piper, is a good subject for such a literary mapping project not only because it’s quite long, but also because Whitman continually rewrote and republished it over several decades, allowing for comparison between separate maps for all the editions. By pointing out the differences in pattern between three different editions of Leaves of Grass, Piper shows how Whitman’s style evolved throughout his writing life.

Piper showed us three maps, each one corresponding to a different edition. Each map looked something like a web or a very big constellation: lots and lots of small circles, threaded together by thin filaments going in all directions. Each circle represented a single page of Leaves of Grass, and the filaments represented connections between pages. Piper used a computer algorithm that reads all the pages and decides how closely attached each page is to the others based on similarity of vocabulary, distance (page range), and number of closed loops (connections amongst more than two pages at once). The result is a network of circles and lines that looks much less complex than it really is. Using these maps, Piper explained how each successive edition of Leaves of Grass becomes more and more tightly self-connected, curling in on itself as the number of closed loops increases and the work becomes more cohesive.
Prof. Piper also demonstrated how the pattern within the network graph changes, depending on the author. Whitman’s style, over time, becomes more compact and densely self-referential. A map of the works of Johann Wolfgang von Goethe, on the hand, reveals an outward spiraling. As time goes on, Goethe becomes more and more experimental; the distance between his discrete works expands, the number of closed loops decreases, and the graph branches outwards. William Wordsworth begins with a compact early period, spirals outward in a profusely experimental middle period, and then spirals back into a stable, matured style. And a literary topology can be used not only to study the evolution of a single author’s style, but also to compare individual writers, groups of writers, or even entire literary periods. The possibilities are endless, when every word and syllable becomes a dimension of space that can be mapped digitally.

The beauty of these maps was incredible. Some of them looked like colorful dewy spiderwebs, some like masses of coral polyps or unravelling spools of thread. They would have been as at home hanging on a wall in the art building as in a Powerpoint for an English Department lecture. Once the information from the algorithm has been translated into a visual graph, the process of study becomes very interpretive, almost as if we are looking at a work of art. We have to follow our eyes, searching out the patterns of branching and spiraling. This is not mindless computation, or even empirical science. This is beautiful data.
Although he did crack a few computer-programming jokes that sailed over my head, Piper’s lecture was, for the most part, an invitation to the uninitiated. In fact, as I emerged from the lecture hall and meandered back down the stairs, I detected within myself an unaccountable desire to take a computer programming or statistics class next semester. I hope, at the very least, that there is a way for Wheaton’s English Department to incorporate this beautiful new data into the way we teach, learn, and visualize books.

For a firsthand look and more eloquent explanation of Andrew Piper’s work, please visit his own website, Literarytopologies.org.