"Through his scholarship, teaching, and friendship, Roger Lundin has been a spiritual and intellectual leader at Wheaton College and for Christian higher education." - President Philip Ryken 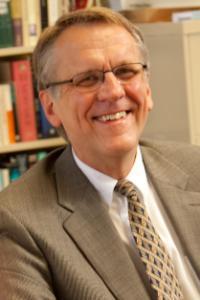 Roger Lundin '71 was Professor of English and Arthur F. Holmes Professor of Faith and Learning at Wheaton College. He had been on faculty since 1978, and was widely known for his passionate teaching, his dedicated service to colleagues, and his outstanding contributions as a scholar.

Dr. Lundin was passionate in his belief that a Christian liberal arts education has the power to shape and transform lives. In 1984, he said this about why he became a professor:

"I began to want to be a college teacher because of what happened to me in the classroom at Wheaton. I felt in a real way that God had used Christian education to heal me — to help me begin to make some sense out of my life. I got tremendously excited when I saw how the particular psychological and spiritual problems — the dramas of my own life — were related to much larger issues in history, in philosophy, in theology, in literature. I saw Christian education, even then, as a way of healing and preparing people to deal with a fragmented world . . . and a great means of making people agents of healing and redemption."

Dr. Lundin not only hoped to impart an appreciation for the power of literature and the beauty and mystery of language to his classes, he further hoped to offer his students constructive ways to serve God in their cultural context and in the church. One of the most rewarding parts of his job was seeing students make sense of what they had learned years after they had left the classroom. He said it was like hearing "about a flower that bloomed 15 years after the seed was planted."

Dr. Lundin specialized his research in 19th and 20th-century American literature, the relationship of religion to literature, modern intellectual history, and the history of Christian thought. He served as the President of the Conference on Christianity and Literature, and was Visiting Fellow in Theology and the Arts at the Duke Divinity School in spring 2014.

His award-winning publications include:

Dr. Lundin’s articles have been published in journals and books including:

Dr. Lundin was a sought-after speaker at events around the Chicago area and around the world. Below is a Wheaton College Graduate School chapel message he delivered in 2011.

An obituary with additional details is available here.

The funeral will be followed by a private burial.

The family of Dr. Roger Lundin has established the Roger Lundin Memorial Scholarship Fund for those who would like to honor Roger in this way. The scholarship will assist an undergraduate English major each year. Gifts can be made online or checks payable to “Wheaton College” with “Lundin Scholarship” on the memo line can be mailed to Wheaton College Advancement, 501 College Ave., Wheaton, IL 60187.

Tributes from the Wheaton Community

Fred Buechner said: 'I have always believed, it is not so much their subjects that the great teachers teach as it is themselves . . . it is they themselves who leave the deeper mark' (Now and Then, p. 12). May we who were his students bear Roger's marks: delight in learning, joy in vocation, generosity of spirit (that one shone so bright in him), groundedness of faith, love of words, urgency in seeking wisdom."

"Few professors have had the formative impact on my worldview as Roger has. Will never forget the Modern European Lit class I was privileged to take with him my junior year--so many books which we read and discussed are now on my syllabus with my own students, impacting an entirely new generation. Dinesen, Bonhoeffer, Mann, Mulisch. I've been irreparably transformed by your passionate engagement with ideas, Roger. Will miss you greatly."