"In an age of smallness, poet Brett Foster is willing for the mind to be large." - ImageMagazine 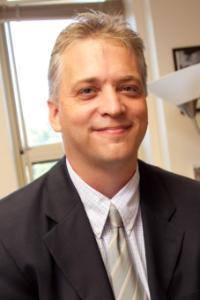 Brett Foster was professor of English and Wheaton's Poet in Residence since 2005. He was born April 9, 1973 in Wichita, KS. He earned bachelor degrees in English and Journalism at the University of Missouri where he met the love of his life, Anise Mathis. He then received a Masters Degree in English at Boston University and his Ph.D. in English at Yale University. He was also a Stegner Fellow at Stanford University. He was an avid collector of English literature and poetry books. He enjoyed the fellowship of family and friends, and never met a stranger. (Read more >)

Dr. Foster's poems have been published in the following:

as well as in the anthologies:

Dr. Foster received grants from the PEN American Center and the Illinois Arts Council, and was awarded the Willis Barnstone Prize for translation and the Baltimore Review Poetry Prize, among others.

Dr. Foster's poetry was recently presented in dramatic form by Wheaton's Arena Theater. The following reflection was sent to Arena Theater from Dr. Foster's pastor, Father Martin Johnson, who attended the performance the night he died.

"I got pulled out of last evening to go back and see Brett. He had just passed through the veil, the 'grey rain-curtain,' and slipped away, according to the hospice nurse, utterly peacefully.

He had gone Home.

But he was alive and kicking at Jenks last night, thanks to you and that wonderful ensemble you gathered together so swiftly and surely.

He was alive and well in your hands and the living, loving way you brought him to life was a justification — if one were needed — of the power of the art you and he and all of us so love: the transformative power by which you gather up everything in life and offer it to God and receive it back, transformed; transforming: the Spirit convicting, challenging, comforting: and ultimately assuring us that Life, not death, has the last word.

The ache of missing him will be there: but the sting has been robbed, and the purity and passion that animated the company last night will go a long way toward proclaiming the victory that Christ has won, and the love of God for this world: for His world. And Brett's part in making that proclamation. Now yours."

A memorial service for Dr. Foster was held Saturday, November 14, 2015 in Pierce Memorial Chapel, located on the southeast corner of Washington and Franklin streets in Wheaton. An obituary with additional details is available here.