The students were first invited to the museum’s Vodou: Sacred Powers of Haiti temporary exhibition. Dr. Lundin offered a framework for understanding the exhibition in relation to Haiti’s cultural history and in relation to students’ own faith. He introduced the exhibition with a brief history of the role of vodou in the Haitian revolution and the cultural significance it held to slaves in rebellion against the French regime. Dr. Lundin concluded by asking students to carefully consider as they explored the exhibit, “how the exhibit challenge stereotypes,” particularly how vodou has been represented in pop-culture as voodoo. Additionally, Dr. Lundin encouraged students to consider how the exhibit presented vodou spirituality and to reflect on it from their own Christian perspective.

The students were then led to the museum’s permanent exhibition of cultures and histories of African nations. Here, Dr. Sasser encouraged students to consider the exhibition’s latter section on the slave trade—of importance to all three classes’ subject matter—and to examine the exhibition’s collection of Ibeji sculptures—statues of twins, significant in West African culture. She emphasized, along with Dr. Lundin, the strong cultural connections between West Africa, Haiti, and African peoples in the Americas due to the slave trade and the African diaspora. 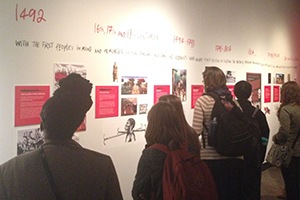 Dr. Sasser, in proposing the trip, emphasized that the various objects and material representations of vodou or of West African culture not only enhance the course readings in both Magical Realism and West African Literature but also ask students to pay attention to “the culturally specific themes and aspects” of those readings and so to pay attention to “the ways cultural specificity matters deeply to the social and political meanings” of the texts in both courses. The museum’s two exhibitions provided students a chance not only to visualize the texts but also, on seeing these relevant cultures through associated material objects, to confront the ways in which these cultures and these texts present a unique worldview.

The trip to The Field Museum offered a chance for the students in all three classes and from both departments to tangibly engage another culture and reframe not only their course material but also their own perspectives within the courses.