Reflections on an Oxford Tutorial

Anna Tipton studied abroad Spring 2014 at Oxford University through SCIO’s Scholar’s Semester in Oxford. There she took a primary and secondary tutorial in British literature, and one of her tutorials met at Regent’s Park College, one of the thirty-eight colleges that make up Oxford University. Here are her thoughts on the opportunity:

I walked into Regent’s Park College not knowing where to go. Another student told me Dr. Lawes would find me in the lobby, so I sat there and waited. He came apologetically a couple minutes late. He was probably in his sixties, wearing brown corduroy pants; a green pullover; a blue tie with white polka dots; and a green, plaid, and tweed blazer. He led me into a conference room in the college and had me read my essay on Andrew Marvell. This was my first tutorial experience with him. 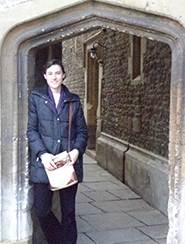 Oxford is proud of its tutorials. The academic advisor of SCIO, the program through which I studied at Oxford University, said during my orientation week, “Tutorials are the most expensive, inefficient system. It’s glorious.” Tutorials require more teachers, and therefore greater costs, in the ratio of teachers to students than in a traditional American educational system where there is one teacher for thirty or more students, but it’s “glorious” because there is more effective apprenticeship between students and teachers.

My tutorials were more like conversations than lectures – exchanges of ideas than note-taking. In fact, this same academic advisor said Oxford thinks of the relationship between teachers and students as seniors and juniors: both are students of the given topic, yet the seniors have studied the topic longer. This perspective implies that both can learn from one another. It gave me the sense of greater ownership of my studies: what I brought to a tutorial wasn’t throw-away research but worthy of a discussion with my senior because they took my ideas seriously.

My tutorials with Dr. Lawes were the traditional, Oxford tutorials. I brought two copies of my 2500-word essay, gave one to him, and then read my copy aloud. He would speak to me quietly and contentedly about how Andrew Marvell was a chameleon poet whose allegiance a reader couldn’t be sure where it lay. At the end of every paragraph he commented on what I wrote, and I asked and answered questions.

Like many of my peers, I became a scholar in Oxford. My tutors gave me resources and time to research and read British writers deeply. I’ve used these skills of research and close reading at Wheaton since I’ve returned because I am now more confident and capable of researching criticism on the texts I’m studying, I take my writing more seriously, and I spend more hours in the library in focused reading and writing. While my time at Oxford allowed me to practice literary research, I came home when I returned to Wheaton. My English professors at Wheaton have taught me more than how to research or read closely: they have welcomed me into their offices for tea and good conversation about life and literature. They have made literature personal to me and shown me that it can change my life. I realize now that I need stories to orient my life in my individual narrative as well as in the Christian metanarrative. It was the one of the best decisions I made at Wheaton to be an English major.