The following speech was offered on October 9th, 2014 by one of our Anthropology Students as well as the Vice President of the William Osborne Society,  Miss Joselyn Broadway, '16.  The event celebrated the occasion of the dedication  and installation of the obelisk commemorating James E. Burr.

Good morning and thank you all for coming to the dedication ceremony for the obelisk commemorating James E. Burr. My name is Joselyn Broadway and I am a senior here at Wheaton and also the Vice President of the William Osbourne Society (which is the Black Student Fellowship on campus). I am honored to be able to share a few remarks with you all today.

As I was doing some research to find out more about this obelisk and James Burr, I came across an article that told why Mr. Burr decided to be buried on Wheaton’s campus and it said it was because “it was an area untouched by slavery.” That line struck a chord with me and I haven’t been able to get it out of my mind since. During that time slavery was a social fact, a part of daily life most, and not in a problematic way. Even in most Christian circles slavery was acceptable, but Wheaton took a stand opposing popular demand to do what is right in God’s eyes.

I come from a culture where legacy is important. I believe that is important to look back at where we come from to see the direction in which we are going. When we look back at our foundation as one of the first institutions in Illinois to admit Black students as well as women we can be encouraged. We can draw strength in knowing that we can take a stand and fight for what is right. The task won’t be easy, because trying to make significant change never is, but we can find some peace in God’s track record thus far. We can look to those who came before us such as James Burr and Jonathan Blanchard and know that we are a part of a legacy of societal movers and shakers. 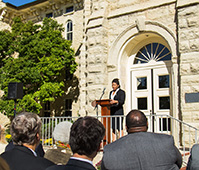 This obelisk is a physical reminder that Wheaton was a place “untouched by slavery”; a place of peace and opportunity for those who were traveling a difficult journey whether on the Underground Railroad or someone who typically couldn’t have a higher education. The Wheaton I see today is making strides towards continuing that legacy with our modern day challenges of race and social injustices both domestically and abroad. I see these battles being fought through our various clubs, organizations, classes, and policies. I hope when people see this monument they don’t take it for granted, but feel a quickening in their spirit to answer God’s call to fight the good fight, to impact the world ‘For Christ and his Kingdom.’